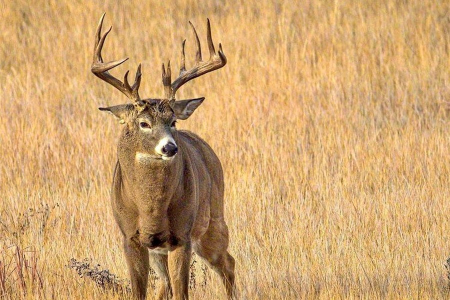 BIG bucks! | The Best States In The U.S. For Whitetail Hunting

As hunters, we all dream of harvesting the trophy buck of our dreams, but harvesting a trophy whitetail for the record books is often similar to winning the lottery.

So, what states have the best whitetail hunting in the United States? Below, we’ll take a look at just that, and we will also explain how we came to rank the states where we did.

A look at the data

We have very few places where we can find trophy whitetail harvest data. Sure, we can get data on the numbers of whitetails harvested in a given year from the various states’ departments of natural resources, but this is all deer and not just trophy whitetails.

Looking at the Boone and Crockett record book is the best indicator of which states are best to target when hunting trophy bucks. (photography by Jeff Coldwell)

If we want to find the best states that produce the biggest numbers of trophy whitetails, then we have to look at the Boone and Crockett record book.

The Boone and Crockett Club has cataloged all world record whitetails harvested since 1932.

So, now that you know where we are getting the data to determine our selection of the best five states to bag a trophy class whitetail, let’s get started!

Ohio is fairly recent to the number five spot on the list and has now surpassed the number of records held by the state of Kentucky.

All of the top 10 typical records and 6 out of 10 top non-typical records for the state were harvested in the last 22 years of the 2000s, and when you consider that the records started nearly 100 years ago, that is a sharp increase in the number of giant bucks.

This sudden jump in record whitetails is due to the stellar management practices by the states’ conservation agencies in recent years.

Minnesota has four counties that rank in the top twenty best counties for whitetails in the U.S., and St. Louis County is #2 in the entire nation. A grand total of 1,194 trophy whitetail entries have been recorded for the entire state of Minnesota.

Minnesota may not be top of mind when it comes to whitetail, but it ranks #4 according to Boone and Crockett statistics.

The other 3 counties listed in the top 20 counties in the U.S. are Otter Tail, Houston, and Winona counties.

Oddly enough, the top 5 record whitetail bucks in the state didn’t come from any of these four counties.

In 2012, with a typical buck scoring 193-⅛ being harvested in Winona county; this buck also ranks #15 in the state’s history.

Everyone’s had THIS hunting problem! [hilarious!]

Filming your own hunts? HERE’s what you’ll need!

Iowa coming in at just #3 may surprise many hunters, especially those from Iowa, as the state has a legendary status regarding the number of big whitetails roaming the state’s woods.

But the Boone and Crocket Club record books don’t lie, and the numbers are what they are.

Iowa has 1,330 records in the books, and the state is home to three of the top twenty counties in the nation, with Allamakee, Warren, and Clayton Counties making the list.

Like with Minnesota, it’s interesting to note that the top five record bucks harvested in Iowa did not come from these three counties.

In 2016 a whitetail scoring 194-⅛ was entered in the record books. This Clarke County buck ranks #8 in the rankings for Iowa’s highest scoring whitetails and #70 on the all-time record list.

Know the difference between a mule deer and a whitetail deer? Check THIS out!

Coming in with a total of 1,445 trophy whitetails in the books, Illinois comes in at #2 for record whitetails.

Four of the top twenty counties in the country call Illinois home, and these four are the legendary Pike, Fulton, Adams, and Jo-Davies Counties.

This non-typical giant, harvested by Luke Brewster, is an example of what is possible in the state of Illinois (photo credit: Boone and Crockett).

Keeping with the theme set by Minnesota and Iowa, the top five typical record bucks to come out of Illinois were not harvested in any of the top four counties.

Illinois has had more entries into the Boone and Crockett Club record books in the 21st century than any other state, with eight entries.

In 2018 an Illinois trophy buck of massive proportions was harvested that came in at #3 on the all-time record list. This monster non-typical buck scored 327-⅞.

Best backpacking tents for your next hunting adventure!

And The #1 State To Hunt Whitetail is… Wisconsin

Wisconsin is the top state in the nation of trophy whitetail records, with a whopping 1,822 record bucks registered since the Boone and Crockett Club records began.

The state is home to six of the top 20 counties in the nation, with the trophy whitetail powerhouse of Buffalo County, Crawford, Trempealeau, Vernon, Richland, and Sauk Counties rounding out the six.

Buffalo County is such a good county for producing whitetails that if this single county stood alone against the rest of the states, it would still rank at #19.

Wisconsin ranks #1 when it comes to trophy whitetails, dominating the Boone and Crockett record books (photography by Jeff Coldwell).

Keeping with the weird traditions of other top-ranking states, none of the top five typical whitetails in the record books were shot in any of the top six counties.

The top five record bucks were harvested in five counties spread throughout the state. This shows that the entire state of Wisconsin hosts exceptional populations of trophy whitetails.

In 2018 a typical buck scoring in at 192-6/8 was harvested in Columbia County and took the spot as the fourth largest whitetail harvested in the state’s history and #96 on the top 100 trophy whitetails list.

THESE bowhunting tips are for everyone!

While the state of Texas is ranked as #11 overall, it is our pick to be an honorable mention for one simple reason.

Texas is home to four of the top six counties in the entire country, which is one heck of a statistic for only coming in at #11 on the list of best whitetail hunting states.

Texas is a state you shouldn’t overlook if you are interested in hunting big whitetails.

Texas has a total of 767 records in the Boone and Crockett record books, and unlike every state on this list, 2 out of 5 of these bucks were shot in the top four counties, and the other 3 were harvested outside of the top 4 counties.

Final Thoughts On The Best States For Whitetail Hunting

There you have it, the top five states to chase record whitetails in the United States.

And remember, just because these states are on the top of the list doesn’t mean you’ll have an easy time trying to make it to the record books!