Every hunting season, many land managers, owners and hunters debate whether or not they should harvest yearling spike bucks.  It is an age old debate in deer camps across the country.

To Shoot Or Not To Shoot A Spike

So what is the answer?  The answer is yes, and no.

The truth of the matter is that there are times when the harvest of spikes is beneficial to a deer herd, and times when it is damaging.  Each tract of land has its own management needs and determining factors of when and why to harvest spike bucks.

With proper nutrition, habitat and rain, today’s spike buck could be a future wall hanger. (photo by Jeff Coldwell)

I may be speaking for myself here, but when many hunters go to the stand, they are looking for a “wall hanger” type of buck, not a spike.  However, more times than not, it’s a spike that shows itself first and the hunter gets disappointed.

Then comes the internal debate: “should I shoot the spike and take his genetics out of the herd?”

Unfortunately, that isn’t how it works.  A bounty of spikes is considered to be a problem, but that isn’t always the case.

I will venture to say that most hunters practice “see spike, shoot spike,” as they believe they are genetically inferior animals.  That is invalid.

Steve Nelle, a Natural Resource Specialist and Wildlife Biologist, once analyzed 15 years of records from a central Texas ranch that was practicing “see spike, shoot spike.”  They were harvesting every spike they saw.  After analyzing these records, he determined that the buck size was not increasing because they were reducing the number of bucks moving into older age classes.

There are a lot of factors that determine whether a buck will be a spike, 4, 6 or 8 pointer as a yearling, and older in life. These factors include rainfall, habitat, nutrition, carrying capacity, and competition.

Let’s dive into these factors to determine whether or not you should shoot the next spike you see next deer season.

Find out when that whitetail fawn was conceived with this calculator

Rain Is A Good Thing

To me, the most influential ingredient in spike development (or lack thereof) is rainfall.  Rainfall ties every other factor together.  If your land is experiencing a drought, it would be a poor decision to take a spike.

Depending on the severity of the drought, the deer herd population could decrease naturally and throw your age structure and sex ratio into shambles.  You’re going to want the spikes to mature into older age classes to see what they become.

If you have an encouraging amount of rainfall, shooting spikes could be beneficial.  The high rainfall creates a domino effect of good habitat and nutrition, which will lead to buck growth and less population attrition.

Poor habitat and/or nutrition is going to lead to poor antler growth and more spikes.  It would be a poor decision to harvest a spike during this time.

Habitat And Nutrition Are Key

The state of the nutrition on your hunting land helps determine whether you should take spikes or not.

There is no way to tell what the potential of a spike is when the property he is living on will not let him get to his full size each year.  When your property does have good habitat and nutrition, there is going to be less die off, and bucks are going to be able to reach their potential for that year.  You will then be able to determine if you should take spikes or not.  Improving the habitat and nutrition on the land is critical.

Learn why EHD and CWD are a deer management nightmare

Carrying capacity is the next important factor in determining whether or not to shoot a yearling spike.  Here are some questions for you to answer.

If you have a surplus of young bucks, I encourage the harvest of spikes.  The spikes will take up essential food for the other young bucks.  Let the young bucks have that food; they may have a greater potential of becoming your dream buck.

FYI, a deer eats around 2 tons of food per year.  If you have a shortage of bucks, do not shoot spikes — or at least not every spike!  Again, it is crucial for these bucks to graduate into older age classes to see what they will become.

Competition: A Buck’s Fight To Survive

The last factor to cover is competition.  When I say competition, I mean the deer having to compete with livestock and other wild game for food, not to mention just finding a way to stay alive!  In the end, the goal of all wild animals is to reproduce and live to see tomorrow.

Most ranches in Texas have cattle that will compete with whitetail for food.

What you need to know about bighorn sheep hunting HERE

Some even have sheep, goats, axis deer or exotic animals.  All of those other animals take away important food and nutrients from deer.  The less nutrients a yearling buck is getting, the greater chance he has to be a spike.

Predation is a factor as well.  The more predators on the property – such as coyotes, bobcats, and mountain lions – the higher the predation rate on fawns will be.  With a higher predation rate, there is a greater need for each spike buck to mature into the next age class.

Check out these amazing piebald deer!

Did I Mention Rain?

Do you see how rainfall is the catalyst to it all?  Once again, I believe rain is the most important factor when it comes to spike management and deer management as a whole.  Unfortunately, we cannot control mother nature but the more rain a property gets, the better.

Rain is the catalyst for all deer management.

Higher rainfall totals throughout the year provide growth of vegetation, which equates to thicker habitat for living, survival and higher nutritional values.

Nutrition is a yearlong need for a whitetail deer, but the more nutritional value a yearling receives from February to September, the better.

With that said, what is almost always overlooked by hunters is the fact that a buck’s antler potential also comes from the mother’s gene pool.  If the mother doe is stressed and has poor nutrition throughout her pregnancy, the buck offspring she produces will have smaller antlers than if she had great nutrition throughout the pregnancy. 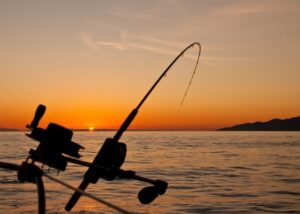 Trending
Get In The Fish! | The Best Fish Finders For Every Scenario And Budget

Maybe you don’t have time to manage your hunting property.  Maybe you’re just hunting for meat and antler size doesn’t matter to you.  That’s great!  That’s the beauty of hunting.

You can manage how you want to manage, and hunt how you want to hunt (as long as you follow laws).  However, if you do manage your herd, the next time you see a spike and have the mental debate on whether to shoot it or not, think about the the variety of factors that effect that deer and your herd.

Kevin has a passion for outdoor activities that started at an early age as his family had a lake house in East Texas, a farm in Central Texas, and a hunting lease in Matagorda, Texas. While getting his degree in animal science and wildlife ecology, he was the co-founder and president of the bass fishing team at Sam Houston State University. His continued love for hunting and fishing prompted him to create TX Sunrise Outdoors, a Texas based outdoor blog (www.txsunriseoutdoors.com). Currently, Kevin spends most of his extracurricular time bow, rifle, and duck hunting as well as fishing East Texas lakes and the Gulf Coast. You can follow Kevin on Instagram (@txsunriseoutdoors) or Twitter (@sunrisetx)