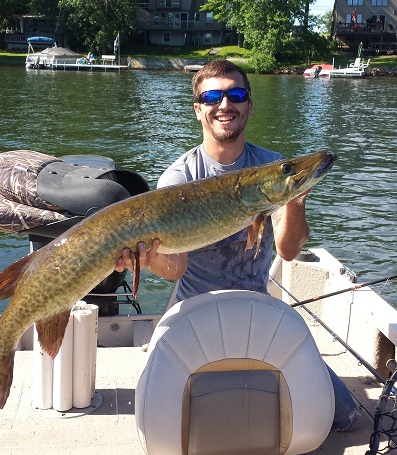 Musky fishing is one of the most challenging forms of freshwater fishing there is. Musky are apex predators with a very low-density population in most cases.

Musky (“muskie”, or “muskellunge” as they are also referred to) are more likely to follow your lure to the boat, inspecting it instead of attempting to eat it.

Musky can be difficult to catch, but if you put in the time following some basic tips, you can increase your chances of a big payoff!

There are times when a musky angler could spend days without contacting a musky and possibly weeks between catching them. But, using certain tips and tactics coupled with experience gained on the water, you can drastically increase your catch rates of this elusive predator.

Let’s take a look at some of the most important tactics to catch muskies.

You cant catch a musky if you aren’t throwing your lures in areas where muskies are present.

Being a good musky angler means that you have great knowledge of the locations and habits of all other species such as panfish, walleyes, pike, and others.

Locating the panfish (like bluegill) is a great way to determine where muskies might be feeding. (photo credit: Ohio DNR)

You need to know the patterns and movements of prey species to best determine where muskies might be.

A good way to determine where a musky food source might be congregating is to pay attention to panfish anglers. Because panfish anglers will often congregate in areas where panfish are in abundance, this can be a good areas to consider locating musky as well that might be feeding on panfish like crappie, perch and bluegill.

Using the visible clue of other anglers, you can also then see what structure is in that immediate area on your GPS/sonar unit or map, and start probing the deep water while respecting the space of the other fishermen in the area.

Get some ice fishing tips for beginners HERE!

Find the “Spots on the Spot”

It’s important to cover a large amount of area on the water to find actively hunting and feeding muskies, but it is also important to find the small precise locations commonly used by a musky to ambush prey.

While a weed line that ends with a steep drop-off is perfect musky hunting grounds, on many lakes they can be hundreds of yards if not miles long.

Within these long drop-offs or weed lines, there will be spots that consistently hold muskies, and these spots may be several yards in size down to the size of a vehicle.

Musky fishing often requires an angler to cover large amounts of area on the water to locate fish that are actively feeding. How to efficiently do this is key…

Which fishing line is best? Read THIS!

Points, inside and outside corners, sections of the drop-off that are significantly steeper than the rest of the drop-off; these spots will hold musky on a regular basis, because they are perfect ambush points for large predatory fish.

Once you find several of these small precise locations on the overall spot, you can skip fishing countless yards of structure and focus on fishing them with pinpoint precision and purpose.

Other key spots can be mid-lake structure such as humps, ridges, spines, saddles, or even areas in the open water basin.

Become a fish anatomy expert with these diagrams!

When it comes to tips for musky fishing, it’s hard to think of a number that’s more important than the number 8…

Lack of figure-8 discipline is probably responsible for more lost fish for beginning anglers than anything else.

You need to focus on doing a proper figure-8 at the end of every single cast. Even if the water clarity is incredibly high and you don’t see a musky following your lure, you should still do it every time.

Muskies can follow far below and behind the bait, and you might not see them, or they could have followed up on a previous cast and are lurking beneath the boat, watching your lures approach again and again. Many seasoned musky anglers will attest to catching a musky boat side on a figure-8 while having zero clues that the fish was ever there.

Info on the best fish finders under $200 HERE!

When you do attempt to figure-8 a musky that is following your lure, you should do it with large sweeping “curves,” and when the bait crosses the center of the invisible 8 you should plunge it deeper in the water, and bring it near the surface on the outside of the curves while increasing your speed.

Tent camping can get frigid… find out how to stay warm!

You can also mix it up by doing big circles instead of figure-8’s and adding pauses or bursts of speed to entice a violent reaction.

Too many times we have witnessed a new musky angler making figure-8s on an active musky that are so small that the musky can’t follow or chase the lure.

Another common mistake of the beginning angler is leaving fish to find fish.

Many beginners, when fishing a large area and contacting fish in the form of missed strikes of follow-ups, but not successfully catching any, will leave the area in search of a fish that will strike.

Whether you are catching them yet or not, don’t leave an area where you know muskies are to search for them elsewhere.

In many cases, this is the wrong move, and anglers should stay in the area and fish it in an attempt to trigger one of these active or semi-active fish to strike.

If you do leave, you need to return to the area throughout the day to see if the activity has increased, and especially during moonrise, moonset, majors, minors, and any changes in weather.

It is not uncommon to have the same musky show themselves to you 4 or 5 times in a short amount of time.

When determining where the active fish are located on any given day when you are trying to establish a pattern, you should have a mental checklist of the places you search and meticulously fish them.

A simple way to do this is to fish your shallow spots where you think there are muskies and work your way out from the shallow areas.

You need to meticulously fish spots as you work your way out for shallow areas to transition areas and then to deeper water.

Starting at shallower depths, work around weed lines and areas of moderate depth, also known as transition areas from shallow and deep water.

After checking these transition areas, you can search deep spots.

When you do this in combination with the “spot on the spot” tactic, you will eliminate large areas of less productive water and fish with great efficiency.

Best ice fishing spots in the U.S. – Find out where HERE!

Don’t get stuck on one particular lure presentation. Mix things up for those finicky muskies. (photo credit muskyshop.com)

Some anglers will fish a bucktail all day and nothing else, even when they are getting little to no action on that type of lure. Don’t fall into the “one lure rut” because it’s a lure you favor, or because it has caught fish in the past.

Switch lures on occasion and chooses the best ones for the situation and spot you are fishing.

The musky fishing community, while it has grown substantially over the last decade, is still incredibly small compared to other species-specific fishing like bass fishing, much of the reason for this is the challenge it represents and the time and dedication involved to catch a single fish.

At the end of the day, there is no substitute for time on the water pursuing these predators, so just get out there and fish!