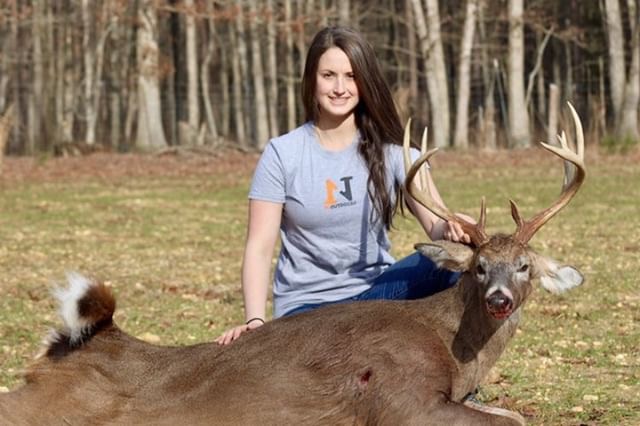 That hunting season had been nothing but hard work, patience, dedication… and rain!

On the morning of New Jersey bow season opener, it was pouring rain, and of course I went out in it… but saw nothing moving in the area. Later, I went back out for an evening hunt and I had three bucks come out to me at the same time, following one another.  However, I was unable to harvest one of those bucks, because for early bow season, it’s “earn a buck,” which means you must harvest a doe first. Nonetheless, opening day was exciting with all the buck action I was seeing, and it gave me even more confidence for the rest of the season.

I sat just about every evening after work, waiting for that solo doe to walk in, and I just was having no luck. I was seeing deer, but they were either too far away, with fawns, or were bucks.

Finally, on September 19th, I kicked off my 2018 hunting season when I harvested a mature solo doe with my bow. I couldn’t have been more thankful!

I continued to check the trail cameras and scout new areas, looking to punch my buck tag. There were numerous young bucks coming to the bait or checking out the area I was hunting, but not any buck I wanted to fill my tag with.  All the bucks I was seeing still needed a few years to reach maturity.

October was about the same as September, as I saw young bucks and does coming in. I was able to harvest another doe that came in with a broken leg and could barely walk.

As I continued checking trail cams, a couple of our shooters were hitting our bait piles or scrapes, but just at night. They became nocturnal and only does were coming during shooting light.  November was coming, and that meant rut season for bucks. And, muzzle loader season was right around the corner.

I took the time on the weekends to shoot my muzzle loader to make sure it was dialed in for the first days of the season.  I sat both days at the end of November and I was able to lock in on a mature doe, 80 yards out in the field. She only ran about 30 yards until we found her.

The following week for us was 6-day firearm, and I knew that any deer we’ve had on camera will soon be moving all over, so we would likely have a chance to see new bucks come in the area. However, 6-day firearm came and went and I still had my muzzle loader buck tag waiting to be punched. I continued to sit the days that were open for muzzle loader season, hoping to punch my buck tag before the year was up.

Learn how to do a Euro Mount for your buck!

That day finally came, December 26, 2018 at 3:38 pm! That is when the wait finally ended and I was able to fill my last tag for muzzle loader, and fill it with an incredible buck.  I had to work the morning of the 26th at 5 am until 1:30 pm. I got home, changed, and my dad and I went out to both sit in an evening stand with the muzzle loader.

I got in the stand around 2 pm.  The wind was blowing in my favor, the weather was perfect, and it was quiet. Around 2:20 pm, I kept hearing something to my left but saw it was just some squirrels chasing each other. I turned to look to my right… and that’s when I caught a glimpse of his antlers.

The only thing I could see at first was the crab claw on the left side.  When he walked a little farther out of the laurels he turned to look next to him and that’s when I knew he was a shooter.  My heart started to race, my breathing got heavy, and my hands started to shake.  I reached to grab my gun, although very slowly, since he kept looking around curious about something. His tail was going up and down and he acted calm as he walked the area.

I finally got the gun half way onto the shooting rail when he turned to look in my direction.  I thought he could hear my breathing, because in my head, I thought I was so loud. So, I hid my mouth in my scarf and took a deep breath.

I moved the gun up to look at him through the scope.  I still couldn’t believe this buck just walked out in front of me. And, it was a buck we had never seen before. He went 10 yards behind the pile and made a half circle and then looked straight toward me. I had the cross hairs directly on his chest and was debating about shooting him right there.  I thought to myself “he’s going to take two steps left or right to be broad side and that’s when I’ll shoot.”

Sure thing, he took two steps to his left looking to my right, stood completely broadside, and I knew that was my shot.

What’s the best shot on a deer? Find out!

I took one last deep breath and squeezed the trigger.  Through the black powder smoke, I saw him jump in the air and do the famous kick, and took off.  I watched him run directly away from me and then I heard the crashing and saw the white of his tail and that was it.

Now, my nerves kicked in again and my heart was racing. I took a deep breath and couldn’t believe what had just happened.  My dad heard my shot from across the field and texted me to ask if that was me who shot.

I was in total shock.  We waited a good 45 minutes until we went to go look. My dad stayed in his stand hoping something would come out since it was still early.

I had done it! My first whitetail with a muzzle loader. What a memory!

My boyfriend came to help me track. We had been following the blood trail, and not 50 yards away, we saw his white belly sticking out in all the green laurels.  I couldn’t believe that I harvested this amazing, mature whitetail buck! Especially since it was my first buck with my CVA Muzzle loader!! This was definitely an N1 Moment that I will never forget!