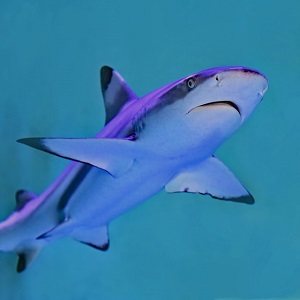 A Guide To Sharks In The Gulf Of Mexico

As apex predators, sharks help to maintain the food chain in the Gulf by removing weak and sick fish and sea mammals. Sharks also help to keep the balance with other competitors to ensure species diversity.

The Gulf of Mexico contains a wide array of sharks, like this Oceanic White Tip Shark (photography by Eli Martinez).

Globally, there are 350 species of sharks, and 51 of those different species thrive in the Gulf’s offshore waters. Read on to find out more!

You may not be able to keep every shark you catch in the Gulf, but that just ensures the other types of fish you catch will be worth the battle.

But, what kinds of sharks can you expect to catch and release while you’re on your Gulf fishing trip? Below are some of the many different shark species you can expect to see.

What Sharks Are in the Gulf of Mexico?

You’re most likely to see sharks in the Gulf between May and September when the waters are warmer, especially along the beachfront and nearshore waters of Galveston.

Sharks can be fun to fish for because they’re such strong fighters, making them the best choice for anglers looking for a big fish fight.

The bull shark is one of the most aggressive shark species in the world. These fearsome fighters can grow between seven and 11.5 feet long, weighing up to 500 pounds.

While it may not be the largest shark in the water, the bull shark has a stronger bite than any other shark species.

The bull shark is not only one of the most aggressive sharks, but it has the strongest bite!

The thresher shark is named for its exceptionally long tail, which it uses to stun its prey. These sharks can reach up to 20 feet long and can weigh up to 1,100 pounds.

Other types of thresher shark (there are three in total) are smaller and range between 10 feet and 16 feet.

The Thresher Shark’s long tail is a distinguishing characteristic. (photography by Eli Martinez)

The hammerhead shark is an iconic species because of the shape of its head, which allows it to see all the way around its body. It also has an incredible sense of smell, which it uses to find prey.

The hammerhead shark is unmistakeable, due to its unique head shape.

Compared to other shark species, the blacktip shark is on the smaller side coming in at just eight feet long. The blacktip can weigh anywhere between 66 to 220 pounds.

You might be able to spot these sharks above the water. They leap above the surface and splash down on their backs as a way to stealthily strike at fish near the water’s surface.

The black-tip shark is one of the more acrobatic sharks, as it often jumps above the surface while striking its prey.

The oceanic whitetip is considered a bold and persistent hunter. It ranges between nine to 13 feet long and weighs an average of 200 pounds.

Large and stocky, the oceanic white tip has a distinctive pattern of mottled white markings on the tips of their tail, dorsal, and pectoral fins.

The oceanic white tip shark has distinctive markings on its tail and fins.

The shortfin mako is the fastest-swimming shark in the world, capable of swimming at 60 mph or 61 feet in a single second.

The shortfin mako is also capable of jumping up to 30 feet high. These sharks range between 133 to 300 pounds and 10 feet in length.

Mako sharks can reach up to 10 feet in length!

Learn to tie this extremely strong fishing knot (know what it is?)

Nurse sharks are a major tourist attraction for the Gulf of Mexico because of their docile nature.

Snorkelers and divers enjoy swimming with these creatures along the warm tropical shallows.

Although these sharks are relatively harmless to humans, they’re certainly not small. Nurse sharks can grow up to 14 feet long.

The nurse sharks calm demeanor makes it a popular tourist attraction for divers and snorkelers.

Lemon sharks are the most likely to interact with humans in the Gulf of Mexico because they prefer to hunt bony fish and sea birds along the shoreline.

Lemon sharks are also some of the most social sharks in the ocean. Unlike other sharks that hunt alone, lemon sharks prefer to live and hunt in large groups.

The average lemon shark can grow up to be around 11 feet in length and 220 pounds.

Notice the beautiful eyes of a lemon shark. Amazing! (photography by Eli Martinez).

Like the lemon shark, the finetooth shark also likes to travel in large packs. These sharks prefer shallow waters and rarely swim in depths over 66 ft.

Learn step-by-step how to tie the Uni-knot for fishing!

They have a pointed snout, oval eyes, long pectoral fins, and an asymmetrical tail. They can typically be found along the ocean floor.

This shark gets its name from the dark spot located on its long snout. Blacknose sharks are typically yellowish-gray in color, which allows them to blend in with the sand along the ocean floor.

The sandbar shark prefers to swim along the sandy bottoms of coastal areas. Like many other requiem sharks, sandbar sharks prefer warmer waters and make a seasonal migration down to the Gulf of Mexico, but they’ve been known to travel as far as the Long Island Sound to give birth.

Sand bar sharks prefer the warmer waters of the Gulf of Mexico.

The tiger shark’s name derives from the dark stripes along a juvenile’s. The tiger shark can grow to be as long as 16.5 feet and weighs anywhere between 849 to 1,400 pounds.

Tiger sharks are slow swimmers, reaching a speed of just 2.4 mph, but they’re also one of the ocean’s strongest swimmers.

The tiger shark is an aggressive hunter and has been known to attack other sharks while hunting.

Tiger sharks can reach lengths of over 16 feet and weigh up to 1,400 pounds! (Photography by Eli Martinez)

The silky shark gets its name from the smooth texture of its skin, which isn’t common in other shark species.

The silky shark has a slim, streamlined body that can reach up to 12 feet in length and weigh up to 770 pounds. Silky sharks have a strong sense of hearing, which they use to locate bony fish, squid, and octopi.

The silky shark has a smoother texture to its skin, unlike most other sharks.

There are many different species of shark you can fish for in the Gulf of Mexico. Each one provides a unique fishing experience you’ll be sure to remember.

Capt. Shane Cantrell is one of the best fishing guides in Galveston that has made his life long passion of the gulf coast fisheries into a career. Capt. Shane has been fishing his entire life and guiding Galveston fishing charters for over 15 years.