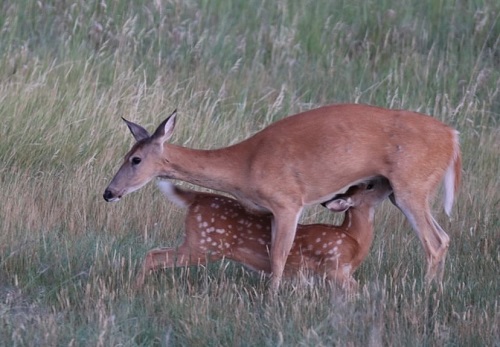 Quickly find out the approximate conception or birthdate of whitetail, mule deer, elk and other types of deer species using the gestation calculator below!

gestation Calculator
Choose animal below and select “conception date” or “birth date” to calculate the corresponding birth or conception date.
choose animal
–
–
Click HERE to subscribe to our YouTube Channel!

When it comes to whitetail and other types of deer, there are two time periods during the year that are particularly fascinating.

For hunters, the “rut” is certainly an important time, as males seek out females for breeding. During this time, the woods and hunting grounds are alive with activity and often provide a hunter the best opportunity at the buck of a lifetime.

Learn the details about EHD and CWD in deer

And, while the conclusion of the rut often signals the end of hunting season for many, a different stage will soon begin. In the Spring and Summer months, does will begin birthing fawns that were conceived during the rut and a new part of the life cycle will begin.

If you frequent the woods during this time, you just might catch a peek at a small, spotted whitetail fawn. And, if you utilize trail cameras during the Summer months to keep tabs on your herd, a picture of a fawn is always a welcome surprise.

But, how long are deer pregnant, and how can you figure out when the fawns will start dropping in your area?

The spotted coat of a whitetail fawn is a beautiful thing to see. You have the best chance to see these young deer in May or June.

To determine the approximate conception date of a whitetail fawn or the estimated birth date, you have to first know the gestation period (how long the baby deer is in the womb between conception and birth.)

According to Mark K. Johnson, Professor at the School of Renewable Natural Resources at Louisiana State University, the gestation period for whitetail deer (Odocoileus virginianus) in the northern U.S. are similar to that of whitetail in the southern states, ranging from 193 to 205 days (Spring 2002 issue of Louisiana Agriculture).

The amazing and unique Piebald Deer

Based on those statistics, whitetail does bred in early November would likely be born in mid-May to early June. So, female whitetail deer are pregnant for about 6 and a half months.

If you happen to have trail cameras out during the Summer months, you may catch a photo or video of a fawn with its mother. The unmistakable spots on young fawns is beautiful to see until they begin to fade 3 to 4 months after birth.

Let’s take a look at some of the other types of deer and the gestation periods of each.

According to a 2005 report published by the Natural Resources Conservation Service and the Wildlife Habitat Council, the gestation period of mule deer (Odocoileus hemionuslasts) an average of 200 days. So, the mule deer and whitetail have almost identical gestation periods.

The pregnancy length of a mule deer is almost identical to that of the whitetail. (photo by Jeff Coldwell)

Check out the differences between mule deer and whitetail

While the number of days that whitetail deer and mule deer are pregnant is very similar, the elk (Cervus canadensishas) a longer pregnancy.

According the Minnesota Elk Breeders Association, the average gestation period for elk is approximately 246 days. The “rut” time period for elk ranges from late August to late October with calves typically being born in May or June.

Bull elk have a gestation time of approximately 246 days.

Step-by-step instructions on how to make a Euro mount

According to the Oregon Department of Fish and Wildlife, the average gestation time for a black-tailed deer (Odocoileus hemionus columbianus), is approximately 203 days.

According to the Natural Science Research Lab at Texas Tech University, the gestation period for the Chital (Axis deer) ranges from 210-238 days.

Moose (Alces alces) calves are born any time from mid-May to early June after a gestation period of about 230 days, according to the Alaska Department of Fish and Game.

Moose calves are typically born from Mid-May to early June.