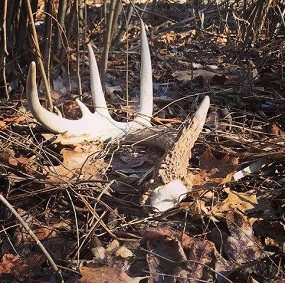 Have you ever been walking through the woods and found the antler of a deer? It’s like finding hidden treasure.

But, how did it get there?

The dropping of the antlers may take place within 24 to 48 hours, but the entire shedding process may take as long as two to three weeks before the antlers actually fall off. Then, throughout the summer, new antlers will regenerate.

The shedding and regrowth of a deer’s antlers is an amazing process.

During the rut, bucks will fight using their antlers, in an effort to establish dominance and the right to breed the does.

Read on and let’s take a deeper look into deer antlers, how they are used, and the shedding process in general…

What are those antlers used for anyway?

Male deer, or “bucks,” use their antlers as a weapon, whether to compete for a mate, or to defend themselves. They also use their antlers to display their physiological fitness and to show off their fertility and strength.

Bucks will violently clash their sets of antlers during the breeding season, or “the rut,” to display their strength and dominance. This can sometimes lead to broken antlers, bloody deer, and sometimes even death.

Because of the competitiveness that takes place during this time, bucks with the largest set of antlers (referred to as a “rack) often position themselves to be in the right place at the right time, as a female deer (doe) comes into estrous and becomes ready to be bred.

Now let’s take a look at the the specifics of the growth of this part of a deer’s anatomy.

Increasing levels of testosterone, in addition to decreasing daylight hours, are among the major factors contributing to antler growth during the summer months.

Considered as the most extravagant display of a male deer’s sexual traits, these antlers grow much faster than any other bones among mammals.

A deer’s antlers grow from an attachment section on its skull known as a pedicle. Antler growth starts at the tip and initially forms as a cartilage, which is later replaced by a bone-like tissue that is similar to a honeycomb.

During the growth period, the pedicle is covered with a highly vascular skin, called “velvet,” that supplies nutrients and oxygen to the developing bones.

During summer, deer antlers grow rapidly within two to four months and – according to Peter Yang, PhD, associate professor of orthopedics at Stanford University School of Medicine, they can grow up to 2 cm per day. During this process, the antlers eventually mineralize and harden.

But then, once peak levels of testosterone are reached, a deceleration of the growth rate of a buck’s antlers occurs.

During this period of peaking testosterone, the veins and arteries surrounding the velvet cut blood flow and supply of nutrients to the antlers.

Because of lack of blood and nutrients, the velvet that encases the antlers wastes away and falls off when the deer rub their antlers on trees. This is often referred to as the shedding of velvet.

Because of their rapid growth rate, antlers may be a disadvantage because there is an enormous need for good nutrition in order for a buck to regrow them every year. But, this can also signify a buck’s metabolic efficiency and superior food gathering capability.

So, now you know how they grow, but why do deer antlers eventually fall off?

EHD vs CWD in deer: Learn the difference

WHY do deer shed their antlers?

So, we’ve explored how the antlers grow, but why do deer shed them later on?

In exactly the opposite way that bucks grow their antlers, the shedding of those same antlers among bucks is triggered by decreasing testosterone following the rut, as well as increasing minutes of daylight.

In the wild, injuries and nutrition also play a huge part in the antler shedding process. For example, a healthier buck loses its antlers at a much later period compared to a weaker deer.

>> Check out all the N1 Outdoors Tee designs

The pedicle, or mounting point, where these antlers are attached and grow from, is also the location where the antlers break off.

This is the same buck before and after shedding its velvet. Left photo: Late July. Right photo: late August.

WHEN do deer shed their antlers?

The particular time a buck will discard its antlers may be largely determined by its individual shedding cycle. This is separate from other bucks’ antler cycles and is possibly centered on its birth date.

In Mississippi, a study conducted among individual penned bucks found that they shed their racks about the same week every year. Other research studies on captive deer discovered that bucks often shed both horns three days apart of each other.

Most bucks will retain their antlers through the winter and into the early Spring and then start shedding their racks anywhere between January and April. Some bucks may shed their antlers earlier or later depending on the maturity of the deer, its physical condition, and the habitat where they live.

Photoperiodism is the physiological response of different organisms to the length of night or day. This happens both in plants and animals. Among bucks, photoperiods occur alongside the testosterone to grow the antlers and define when they will fall off.

Testosterone levels increase during the development and the ensuing shedding of the antler velvet. As the seasons start to change, the biological reaction of antler shedding is activated.

When testosterone levels peak, the mineralized antlers have hardened and bucks shed their velvet that had covered the antlers.

Genes also help define early or late growth and shedding of antlers, mainly due to family history which may have an influence on the overall health of the deer.

In general, a deer will lose its antlers during the same time period each year, except for other factors such as health conditions or injuries.

Emotional factors can also play a part in the deer antler shedding process. Just like humans, deer experience social anxiety which may have a negative impact on their health condition and lead to earlier shedding.

Other factors such as weather, altitude, and food availability may also influence when antler shedding takes place.

Some scientists believe that the shedding process is necessary in order for bucks to replace broken or damaged antlers. If a deer has to live with a broken beam or cracked tines his entire life, he will not have the necessary tool to fight off rivals or have the stance to attract does. New racks can grow anywhere from ten to thirty inches bigger every year and this allows bucks to also keep up with their increasing girth and weight as they mature.

How long does it take a deer to shed its antlers?

The duration of the shedding process all depends on how fast a buck decreases its testosterone levels. In most cases, this may happen in less than two to three days.

Individual bucks will typically shed their antlers at the same general time each year.

Although the antlers may appear solidly fixed, they may start to loosen up rapidly as the mating season progresses and natural physiological cycles happen.

After a while, an abrupt jerking actions or a sudden scare from nearby predator can cause enough force to cause the antlers to fall off. The muscle is no longer tough enough to support the weight of the rack, and as a result, the antlers simply fall off.

As the connecting tissue withers and shrinks, the antlers become loose and fall off. In areas with an early mating season, testosterone levels of bucks will decrease earlier, causing some bucks to cast their antlers off at an earlier time than usual. A harsh winter with a tons of snow can also cause stressed deer to shed racks earlier.

Compared to younger bucks, many older bucks shed antlers earlier. After the mating season, the decreased levels of testosterone cause the formation of an abscission layer between the pedicles and antlers.

Individual deer also have unique shedding patterns. It is also worth knowing that some equatorial deer never shed their antlers regardless of the condition.

In general, bucks in peak physical condition will hang on to their racks much longer than weaker bucks. Their prime health allows them to have stronger tissue and maintain a better physical condition causing a higher than normal antler to head stability.

Late shedding may also be caused by several other factors. Changing deer populations in a specific location may play a large part in later shedding. Low population indicates antler shedding may not reach its peak until late March or April.

First year bucks that reach the right rearing weight during their first winter will experience the estrous cycle, the recurring biological changes that are produced by reproductive hormones. This will keep the testosterone level of a deer higher for a longer period of time, which may lengthen the amount of time a buck will keep its antlers.

Other Facts About Antler Shedding

In the past, people believed that deer look for a more secluded area to shed their antlers, away from does and rival bucks to avoid public display of their loss of virility.

But, researchers debunk that idea saying that bucks are probably oblivious of when and where they will lose their antlers, although some may follow a regular pattern depending on the conditions.

Some deer will drop both antlers, if undisturbed, almost on top of each other each year. However, some bucks will drop their racks anywhere from a hundred to four hundred yards apart from each other.

The process of deer antler growth as well as the shedding process is truly an amazing occurrence. So, next time you come across a mule deer, whitetail or other type of deer antler in the woods, remember, it went through a lot just to be there!