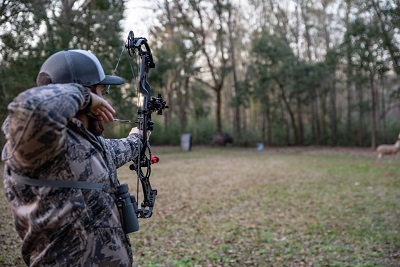 At the time of writing this article, I have been shooting bows for about 14 years. I remember the first time I heard someone mention aiming drills because they were “panicking” when they would shoot their bow.

I thought they were crazy.

Boy, did I ever find out that my time with target panic was coming.

Ever have this type of result when shooting your bow? Maybe you are experiencing target panic.

So, What Is Target Panic?

Target panic is basically being afraid of missing the target, thus causing an anxiety of sorts.

It wasn’t until the Summer of 2018 that I found myself having a problem with target panic. I first noticed it at one of the Total Archery Challenges. My shot process would fall apart every time that I would draw and try to take aim at one of the 3-D targets.

As I fought through the rest of the summer, I forced myself into thinking I could just ignore it, shoot more, and it would get better. I did this nonsense all the way through late fall.

Target panic in archery and bowhunting is a real thing… so how can you fix it? Keep reading!

The first step to curing target panic… Admit you have a problem.

Follow these steps to begin to fix your target panic:

From Bad To Worse… To Missing Completely

I somehow managed to harvest an elk in early September, with one of the best shots I’ve ever made.

Looking back it was a miracle or just luck. That’s the only way to explain it with all the struggles I was having. After elk season, I didn’t shoot much for a few weeks until I was getting ready for archery whitetail season.

This is when things got worse.

While shooting one day at a 3D deer target, I started missing completely at 40 yards. I was only hitting the deer every two or three shots! Needless to say, my issue was getting expensive very quickly, at the loss of several Easton Full Metal Jackets. From an archery standpoint, I was pretty much falling apart. I knew then that I had a big problem.

Obviously, everyone reacts differently, but the following is the detail on what happened to me.

Give this arrow speed calculator a try!

As I was going through my shot process, I would nock an arrow, attach my release to the D-loop, draw the bow and find my anchor.

After this is where I was a complete mess.

When I would go to acquire the target in my peep, my heart would begin to race, my mind would scramble, and the second that my pin would reach the desired spot on the target, my index finger would have a mind of its own and just yank the trigger.

This wasn’t just an errant arrow or two. Basically, I was shooting my bow the same way you would shoot at clay pigeons with a shotgun.

Those who have been in archery for any length of time know that, with all that movement, it was impossible for me to have any type of grouping. I was anticipating the shot so badly, that I simply could not be accurate.

So, If you cannot simply draw your bow, acquire and hold on your target, then squeeze your trigger without anticipating the shot, I am willing to say that you have some sort of target panic.

How I Cured It

First things first… you have to ADMIT you have a problem. When I finally came to terms with the fact that I was experiencing target panic, I began calling around to a few of my friends that have been shooting for years.  I got several different answers.  I also watched YouTube, read articles, Googled information, and tried a pile of other things.

Now, I’m not saying everything that I tried and learned didn’t work. For the most part, it was all great info. But, I wasn’t getting any better. Finally, once I got sick enough of not being able to hit the broad side of a barn, I got in touch with a local pro named Gregg Copeland.

Gregg is a phenomenal coach, who I had met at a few indoor, Vegas-style shoots. He had me to meet him at the local bow shop that had an indoor range, so he could see how bad things really were.

Thankfully, I don’t get my feelings hurt very easily, because my shooting was downright laughable. I also enjoy joking around and Gregg knew that.

He placed me 10 feet from the target. He then had me nock an arrow, draw the bow, and hold the pin on the target until I started wavering. I would then let down, rest for a minute, and repeat.

I would say that we did this 20 to 30 times. By the end of the aiming drills, I was able to at least aim without completely losing my cool. A huge sign of progress already! Aiming was something I hadn’t been able to do in months!

Want to know how archery came to be?

Next, Gregg had me tighten the tension on my bow release to as stiff as it would go. This forced me to squeeze the trigger until the shot went off, so I that I could no longer “punch” the trigger, as I had been doing.

Now, keep in mind, we never moved back any from the aiming drills. We were still only 10 feet away from the target.

We went through the release drills a good 20 to 30 times. By the end of those, I was able to make decent shots at 10 feet. At that point, Gregg could have told me to stand on my head and I would have done it, because the sequence he had me doing was working!

I was taking each piece of advice like it was gold, and to me it was.

He wanted to see how I would do if we stepped back to 15 yards. Sure enough, in that short time, I was able to repeat what he had taught me and hit right where I was aiming.

After the lesson we shook hands and he left me with instructions of what to do once I got home. Gregg told me to go and set up at ten feet from a target and practice aiming drills every day before I shot a single arrow.  He also forbid me to shoot a single shot past 15 yards until I was able to make perfect shots at that distance. I did these exact drills for at least a month.

Going through your shot process the same way every time is a critical to curing archery target panic.

So, Does It Work?

Following Gregg’s instructions, I rarely missed a single day of shooting. After about a month of nothing but the daily drills, the anxiety finally subsided and I was able to enjoy shooting my bow once again.

I am now able to shoot pie plate groups out past 80 yards. I am not saying I am currently the best that I have ever been, but I am well on my way.

One of the things that I took from shooting with Gregg was how much importance he put on the shot process.

He told me multiple times, “without a shot process, you have no shot.”  He said, “without all the right ingredients, you can’t cook what you desire, so you sure ain’t going to shoot what you desire with out the exact process every time.”

Look at it this way, if you are struggling with target panic, with the right methods, and hard work, you are only 3,000 to 6,000 shots away from it being “fixed”, and yes, it is fixable.

Get the lowdown on traditional archery bows Trending
What If Bowhunting TV Commercials Were Like Drug Company Commercials?

Now, I try and do things that might trigger target panic. For instance, I will shoot at a 3-D deer out to 70 yards, extremely quartered away. I also have a basket ball size target that I will try and shoot at farther distances as well.

By doing these things, I am simply just trying to make myself uncomfortable. This way, I can remember my shot process, regardless of the situation, and still make the shot smooth and clean.

You do the same things at 20 yards as you would at 80 yards, you just have to convince your brain of that. Through this process, I have learned so much about archery and have experienced a whole new love for shooting my bow.

So, having target panic wasn’t so bad after all. I guess you could say there was a silver lining. I have 100% come through target panic as a better archer. Come September, the Elk better be on their “A” game, because I will be on mine.

If you have interest in researching various types of archery broadheads, be sure to check out our in-depth broadheads blog post and also get reviews on expandable broadheads as well as fixed-blades.