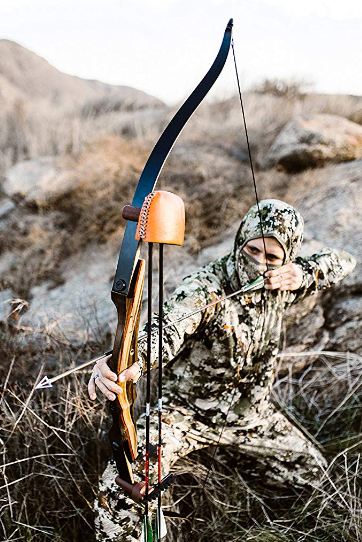 Gear Up | The Basics of Traditional Archery Bows

“Hardcore” is the best word to describe Traditional Archery.

It not only takes an archer that has skills, discipline, a keen sense of direction, and environmental awareness. To shoot a traditional bow, it also requires strength, endurance and patience.

Traditional Archery is a motivating and challenging activity that has been around for thousands of years since the late Stone Age and was prominently aided as a main tool for providing food, protection, and recreational purposes.

“The archer is the true weapon; the bow is just a long piece of wood.”

Apollo, The Amazons, and Clint Barton are some of the legends in the field of Archery and have proven to be super-efficient in using one of the most supreme portable weapons man has ever made.

So, What Is A Traditional Bow?

A traditional bow is a bow that does not use any special equipment or accessories like most modern and compound bows do. You will not find components like sights, manufactured arrow rests or stabilizers on a traditional bow.

Traditional bows are often made from a single piece of wood, while some are made of wood that is laminated together.

To be a fulfilled traditional archer, you would first need the tools to get set and ready to shoot.

Basic traditional archery gear may consist of a bow, and arrows. However, there are certain variations of bows to fit an archer’s preference, along with style of shooting or hunting.

A Recurve bow is a bow composed of limbs that curve away from the archer.

A recurve bow is designed to store more force, which delivers more speed compared to straight limb or longbows.

Recurve bows are made in different lengths and draw weights to fit individual archers.

Three-piece takedown bows are composed of a riser, and a pair of limbs are the most common among today’s traditional archers.

Formerly, these bows were made of a simple piece of wood, shaped to be accurately balanced. These beautiful pieces of art were originally made out of necessity, for hunting. Today, they can be found in a variety of wood, which adds strength, character and color.

They are now an art of tradition, but still able to be shot for fun, as well as for hunting.

Today, longbows can be found in a variety of beautiful woods

Parts Of A Traditional Bow

So let’s talk about the parts of a traditional bow.

Risers are the middle part of a bow where the grip is located. Traditional bow risers are almost always made of a variety of preferred wood material such as dymond wood, padouk, tigerwood, and white oak.

Risers are also available in different lengths, and typically range from 13” to 27”, with most adults using a 23 or 25” riser.

The riser is the middle part of the bow where the grip is located. Risers on trad bows are typically made of high-quality wood like white oak.

Some of today’s bow manufacturers now use carbon, aluminum alloy, or magnesium alloy. Selection is limited on wooden risers, but they are usually the preferred choice for those wishing to shoot traditionally.

On the other hand, alloy and carbon risers take advantage of modern technologies and are used for modern competitive archery.

Limbs are basically the “arms” of the bow, which are mounted and bolted onto the riser.

The limbs function by flexing when the bow is drawn, which helps to store energy which is then passed to the arrow upon release.

Limbs are calculated in different draw weights, depending on an archer’s physique, skill level and purpose (hunting, etc.). The stronger the archer, the higher the recommended draw weight.

The limbs of a traditional bow store energy that is passed to the arrow when the archer releases the string.

If choosing to hunt with a bow, the archer would want a higher draw weight and possess the ability to maintain accuracy with that higher weight in order to to maintain hunting integrity. Bow hunters pride themselves on maintaining ethical hunting practices, while providing for their families. (Many states even have draw weight minimums written into their hunting laws to protect the animals and to reduce chances of wounding versus success of harvesting an animal.)

Traditional bow limbs are usually made of combination of high-quality wood material and a core made of carbon or fiberglass.

Now that you have a reference for what a traditional bow is composed of, let’s talk accessories.

Traditional bows, although known for being a basic stick and string, have options to upgrade.

For example, an archer can add an arrow rest, a sight, a stabilizer, and a quiver. Those looking to get the most out of their bows can also add a bow fishing reel to their traditional bow to be able to enjoy archery in all forms.

A compound bow’s let-off can reach up to 80% or even 90% depending on the bow model. A 90% let-off means that an archer only holds 7 pounds of weight at full draw on a bow that has a 70 pound maximum draw weight, enabling arrow speeds of 250 to 370 feet per second.

What Are The Parts Of A Compound Bow?

The parts of a compound bow vary significantly from traditional bows.

The limbs of a compound bow are usually made of composite materials such as fiber glass or are carbon fiber-based, and are adaptable in enduring extreme stress and pliability.

A compound bow has many parts and accessories that traditional bows do not, such as sights, cams, string stops, stabilizers, etc.

Contrary to what some believe, shooting traditional archery bows is actually not inferior compared to shooting compound bows. they are, however totally different instruments, both still have distinctive extraordinary functions and qualities.

An archer with his/her arrow in some ways is like a pitcher that must be able to throw a fastball, as well as a curveball, accurately and at the highest speeds possible.

However, on the other side of the archery realm, traditional archers use their basic instincts in determining the hows, the wheres, and the whys when hitting their targets. Their brains and their eyes are the main tools to make calculations and determine the distance in complicated angles where the environment plays a huge role in how the arrow reaches its mark.

A traditional archer also needs to be aware of how they are pulling, holding and aiming at 10-20 yards to adjust to shooting even further while maintaining accuracy.

Think of it this way… it is somewhat like a pitcher throwing a fastball or a curveball accurately at the highest speeds possible. This is why consistency is the key to becoming a great archer.

Calculate the FOC of your hunting arrows FAST!

So, Which Should You Choose?

Both traditional and compound bows can be used for indoor and outdoor target shooting, hunting and bow fishing. So, it’s really just personal preference when deciding between a traditional bow and a compound bow.

Traditional bows can be used for indoor and outdoor shooting, and competition as well as for hunting.

The expanding community of modern and traditional archers is astonishingly widespread, and is continuously growing in many categories such as target, field, clout, flight, or recreational archery.

The sport of archery not only improves an archer’s patience, sharpness, strength and hand-eye coordination, but it also provides wisdom, as archers share their knowledge and experiences with other archers.

The sport of archery not only improves an archer’s patience, sharpness, strength and hand-eye coordination, but it also provides wisdom, as archers share their knowledge and experiences with other archers.

For us at Southwest Archery USA, the greatest part of archery, whether it be target archery or bowhunting, is the time we spend enjoying the sport with our family and friends.

Whether you are a beginner or an experienced archer, the truth is, archery is for everyone, from young kids to older adults.

How many types of deer can you name? See a list!