Can you name all the parts of a compound bow?

Check out our interactive diagram below to test your knowledge!

You might be new to the sport of bowhunting and be looking to learn all you can about it.

Or, maybe you are a seasoned bowhunter wanting to test your knowledge.

Either, way this one’s for you!

In the interactive diagram below, you can click/touch the NUMBER of the parts in the chart below to reveal the names of each item. You can read more about what each part is and does in the sections below the diagram. See how many you can get right! 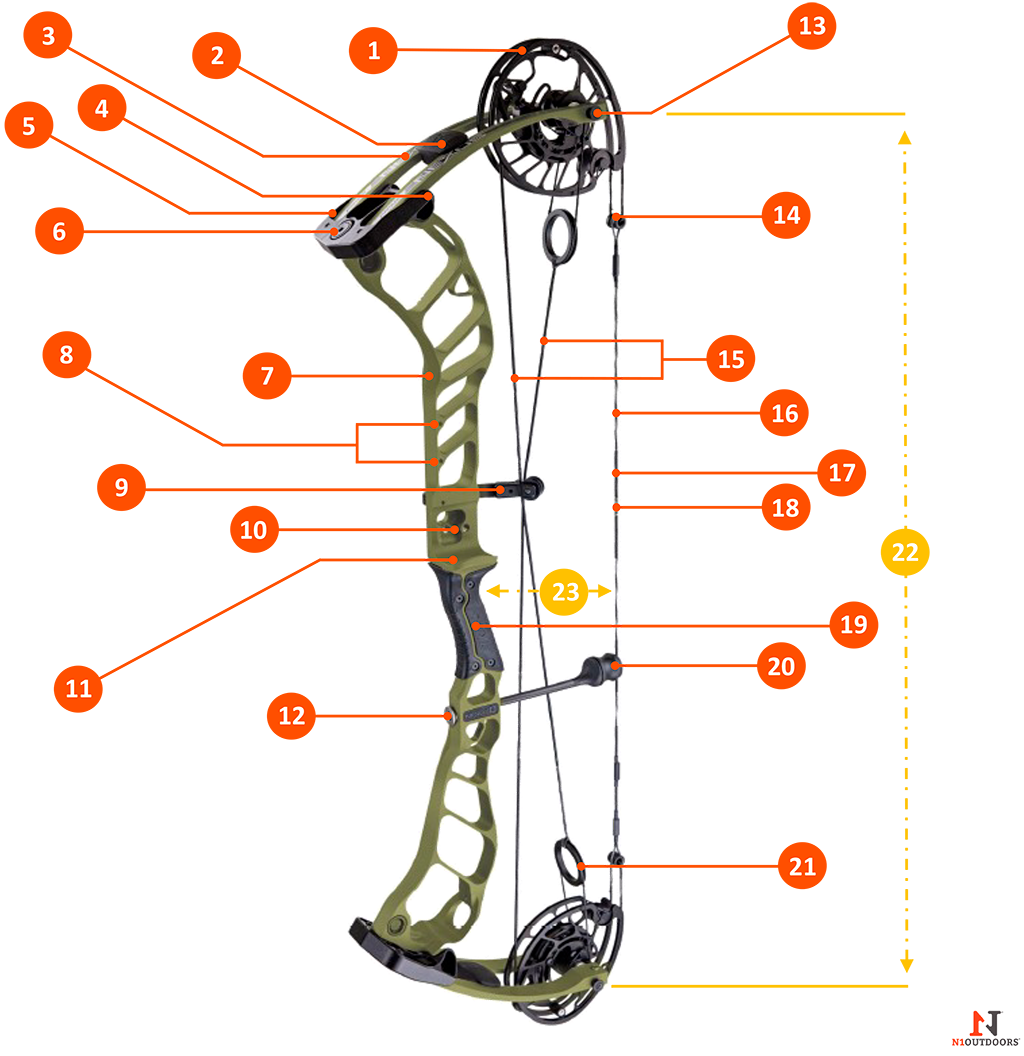 In the above diagram of the Nexus2 by Prime Archery, you can view the parts of a compound bow. Find out more about what each part does by clicking the words below:

On a compound bow, the cams are the round, or oval-shaped discs that work much like a block-and-tackle pulley system. The cams are connected to the axles of the bow.

The bow has a “back wall” where the cams will not turn any more. This is where the archer is at “full draw.” At this point, there is a percentage of “letoff” that allows the archer or hunter to hold the force of the bow at a fraction of the actual pounds of pull being exerted.

For example, a bow that is set to a 70-lb draw weight with a 70% letoff will only take 21 lbs of force to hold at full draw. The energy is stored in the bow’s limbs until the archer releases, which unleashes the multiplied energery, propelling the arrow toward its target.

So, the cams of the bow are what change the bow in essence from a traditional bow to a compound bow.

Limb dampeners reduce the noise and vibration throughout the limbs and riser of the bow.

When the hunter or archer releases the arrow the sudden and powerful uncoiling of the string on the cams produces vibration, which causes noise. The limb dampeners help to absorb that vibration, resulting in a quieting of the bow.

This absorption by the limb dampeners is especially helpful in reducing noise when hunting deer or other wild game and also reduces the amount of vibration that is transferred to the archer.

Most compound bow limbs are made up of fiberglass or composite material. Some bow limbs are solid, one-piece limbs. Others are “split,” having a gap between both sides of the upper and lower limbs.

Familiarize yourself with CWD and EHD in deer

Where the limbs pivot and flex on the riser.

Learn all the details about deer hooves

Kinetic Energy and Momentum Calculator that’s free and easy to use!

The limb bolt is the crucial piece in connecting the limb pockets, which hold the limbs of the bow, to the riser.

It’s very important that any adjustment to the limb bolts be made in the same increments. If the adjustments are uneven, the bow’s cams could get out of time, causing an improper tune.

If you need to adjust your bow’s draw weight, it’s a good idea to back the limb bolts all the way down and then start moving them both up the same amount.

Check out these archery tips just for bow hunters

The riser is the vertical portion and foundation of a compound bow. The limbs attach to it and it also serves as the fastening point for accessories such as the sight, arrow rest, grip, stabilizer, quiver, etc.

Determine how fast your arrow will fly with THIS

Sight mounts are holes in the riser that serve as the attaching point for the bow’s sight. The archer will look through the peep on the bow string and at the pin(s) of the sight to aim at the target or game animal.

Learn where to shoot deer with this vitals diagram

The Cable guard runs perpendicular to the bow’s riser. It keeps the bow’s cable out of the way of the arrow’s line of fire. It typically has rollers and/or slides attached to it to aid in keeping the cable on track.

THIS shot might be the best in all of bowhunting

Rest mounts are holes in the riser that serve as the attaching point for the bow’s rest. The rest is what holds the arrow in place while the archer is drawing and releasing the arrow.

There are many different types of rests. Some use prongs that the arrow will rest on, while others hold the arrow up and then fall out of the way when the arrow is released. Others, called containment rests, completely surround the arrow until it is fired and typically have no moving parts.

THIS will make nock tuning your arows super simple!

The arrow shelf is the area of the riser where the arrow sits on the rest. While the rest typically holds the arrow off the shelf on compound bows, traditional bows (non-compound) usually have the arrow resting directly on the arrow shelf.

Make your own European mount for your deer skull

The stabilizer mount is a universal size threaded hole in the riser that is used to attach a stabilizer to.

The stabilizer helps balance and thus “stabilize” the bow when drawing and shooting, and also typically has vibration dampening properties. In essence, it helps the bow resist movement during the draw cycle and when shooting.

The back of the stabilizer also typically serves as the fastening point for the wrist sling.

Want to know your draw length but not sure how? Check THIS out!

The Axle is what holds the cams, in the same way a car axle holds its wheels. The cams have a hole in the center. The axle goes through the center of the axle and attach to the limbs.

Can you spot the differences between mule deer and whitetail?

Bows with parallel limbs (which eliminate cam lean) will have a string splitter. On these types of bows, the main part of the string that the archer attaches the release to “splits” just before the cams.

The splitter is what essential turns the single string into two strings, each going around its respective cam.

There’s more to deer antlers than you might think. Learn more!
Finally! Arrow wraps for nock tuning your arrows!

The cable(s) runs between the bow’s cams. They assist in moving the cams of the bow when the string is pulled back by the archer. It’s important to replace your cable(s) as well as your string as recommended per the bow manufacturer’s instructions or on the advice of your local bow shop.

The string serves several functions. It is where the archer will connect their release. It is what the archer pulls (or draws) back and releases to launch the arrow.

Many archers will utilize a “D loop,” which attaches to the bow string and serves as a way to quickly attach the release to the string and also improves accuracy.

You should always inspect your string before and after shooting and hunting. A damaged string could end up being a broken string, which could result in serious injury to the shooter or others.

Any cuts or fraying should be addressed immediately and it is recommended that you take to your local bow shop for an assessment.

Get started with public land hunting with these tips

The “center serving” is coiled thread wrapped around the center portion of your string where you would nock an arrow and attach a D-loop. The center serving protect the center section of the string from wear and tear that results from nocking arrows as well as drawing and shooting the bow.

There is also serving material on areas of your bow string that go around the cams or through rollers that are attached to the cable guards. This helps the bow string stay together, especially in places that are likely to received the most friction.

The cure for archery target panic awaits you…

Find the FOC of your hunting arrow fast!

The grip is the part of the bow that you hold while shooting. Grips are made of various materials such as wood, rubber, plastic, metal, etc.

The grip can also be a source of inaccuracy. For example, if you hold the grip too tightly, or twist the grip while shooting, you can cause your arrow to go off-course from where you were aiming.

Check out the various sounds that a deer makes HERE!

String vibration is a large cause for noise when a bow fires. A string stop helps dampen that vibration and thus reduces unwanted noise. The string stop is a rubber part that is often mounted on a post that is directly opposite of the front stabilizer.

The string stop not only helps dampen vibration, but also aids in better accuracy for the shooter, often resulting in tighter arrow groups at the target.

Test your knowledge on all the different types of deer

On some bows, the cable splitter is a ring that connects the cable to two separate cables, thus dampening vibration and noise of the cable during shooting.

This axle-to-axle measurement is often used to determine how forgiving the bow will be in regards to arrow flight accuracy when taking farther shots.

A bow with a longer axle-to-axle height may be more forgiving that a shorter one, but may also be difficult to maneuver in tight-quarter hunting scenarios.

The “brace height” is not a part of the bow, but rather a measurement, in inches, of the distance between the “throat” of the grip to the center of the bow’s string.

A shorter brace height means a longer “power stroke,” which is the distance from the grip to the center of the string when the archer is at full draw. A longer power stroke typically means a faster bow, as it increases the amount of time that the arrow is attached to the string. Parts Of A Compound Bow Conclusion

Whether you are just a beginner bowhunter or looking to brush up on your bow component knowledge, we hope this has been a helpful tool for you!