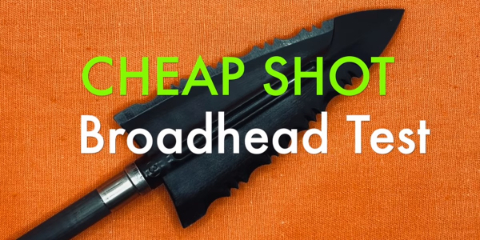 In this review, I tested the Cold Steel Cheap Shot broadhead.

It’s a real value price head that’s advertised primarily for small game because it’s made out of plastic.

That’s right, plastic. So, obviously I was excited to test it!

I did not test the Cheap Shot head in all the ways that I normally test big game broadheads, because they market this as being a cheap head (hence the name, Cheap Shot).

The Cheap Shot Broadhead Up Close

The Cheap Shot broadheads by Cold Steel cost about a buck each.

They say they’re for non-trophy animals. So, you wouldn’t want to shoot at a deer with these, but could try these on small game animals or maybe hogs.

Let’s see how it performed!

So here, you get a good look at the Cheap Shot. It’s a little over 3 inches in length. The cutting diameter is 1 and 5/16″, so just a little bit over one and a quarter inches. You can see the serrations that they have here, which is going to aid in its penetration and its edge retention. Since this head is plastic (they call it space-age polymer), it’s not going to have the edge retention that steel would, but you can make up for that with really good serrations.

Think you know all a deer’s sound? Take a listen…

I tested the Cheap Shot head for flight. I shot two of the heads and one field point for comparison.

Here was the Cheap Shot from 40 yards. You can see where the field point hit near the center, but the two broadheads were not very close.

Since the flight test at 40 yards didn’t go too well, I moved in to 20 yards and shot them again…

I tested (or attempted to test) the head’s sharpness, but I couldn’t get the head to cut the wire… that’s a first.

I couldn’t get the Cheap Shot to cut the wire on my sharpness tester, so no result to report here.

I shot the Cheap Shot into layered cardboard to see how many layers it could penetrate.

In this test the Cheap Shot penetrated through 43 layers of cardboard.

I shot the Cheap Shot into FBI ballistic gel that was fronted with 2/3″ rubber matting and 1/2″ MDF.

I know it looks like it penetrated 5 inches into the gel, but when lined up straight, it was actually only 4-1/2 inches.

Iron Will Broadheads | Pack a punch!

Next I shot the head into MDF. Check out the pictures below…

Here’s the head and the hole that it made in the MDF. It’s a decent size hole there.

As you can see, it broke off at the ferrule and left the threading portion of the ferrule inside my arrow. So I had to work a little bit to get that out.

Here you can see in this picture the distance that it penetrated through the MDF. It didn’t even make it all the way through but it did make it most of the way through.

Calculate your arrow’s FOC fast!
So many broadheads… Learn how to choose!

So what do you think of the Cheap Shot?

I love the creativity and I like that Cold Steel is trying something different.

I also love the price point. I mean, they’re only one dollar for a head. I mean, if you are just starting out with bowhunting and just need a head to shoot smaller animals with, it’s an option. It will definitely work and wallop whatever you shoot it at.

How fast is your bow going to shoot? Find out!

I mean, I’d much rather use an old broadhead or a field point with a judo point or something like that. I just think there are a lot better choices for small game.

But for something fun to try, yeah, I think it’s worth a look for that. So check out the scores. The score sheet is a little bit different because it’s not the typical kind of broadhead that I test. And also, check out my Lusk grade for it.

Check out this deer vitals diagram and learn!