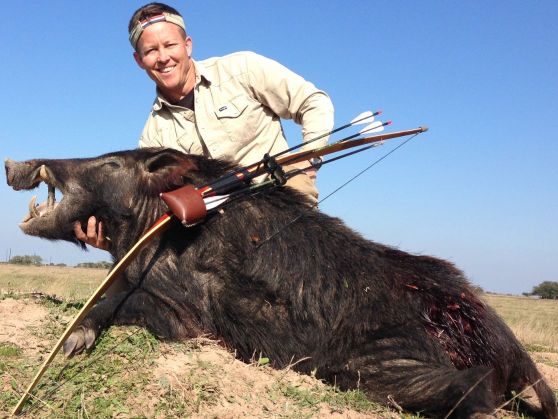 When it comes to your bowhunting setup, knowing the “Kinetic Energy” of your arrow allows you to know how much energy that arrow possesses due to motion, from being shot by your bow. The “Momentum” tells you how much force it will take to stop your arrow when it reaches its intended target.

If you know your arrow’s weight (in grains) and your arrow’s speed (Feet Per Second), then you can use our Kinetic Energy and Momentum calculator above to find out each! Simply move the sliders or enter the values in the blanks. And, if you really want to take a deep dive into the Kinetic Energy of arrows, check out what the Ranch Fairy is up to below…

Kinetic Energy And Bowhunting (How I Got Here)

As you may already know, the ‘ole Ranch Fairy (that’s me) is quite out of the norm in his measuring of arrow systems. (If you aren’t aware, I am definitely one of the strange ones in the bowhunting world.)

In all fairness, I have been heavily influenced by Dr. Ed Ashby’s 12 Arrow Penetration Factors and his almost 30 years-long Natal Study.  These are, in fact, the basis for my YouTube channel and all of the research I have been doing therein.

Anyway, just to set the record straight, the biggest overlap between Dr. Ed, the Ashby Bowhunting Foundation, and the Ranch Fairy is simple: We want to know the highest performing projectile for all impact points to pass through the animal you are hunting.

The goal is maximum arrow lethality.

I like to put it this way: Archery is shooting a target… bowhunting begins at impact with the target.

Finally, I am constantly seeking higher performance and am always questioning what I know today.

Because the longer I live, the more I look back and say, “wow, my assumption about bowhunting 3 years ago (along with many things in life, not just bowhunting) was flawed.”

I keep learning because I kept asking “why” and kept trying to find out ”why.”

Are your arrows high FOC? Find out with our calculator!

The Science Of Arrow Flight

So, now I have embarked upon the science side of the arrow. Some questions to consider:

Big Mike and a “Rocket Man”

I like to say, “It’s better to have smart friends than to be smart.” And, I have had the luxury of meeting ‘Big Mike’ who has coached me on the “functional bow and arrow flight” part of this game.

And then, the latest addition… enter, “The Rocketman,” Darrel R. Barnette.

Just to clarify, the Rocketman says he technically never worked on a ‘rocket’.  But, he did shoot, test, and evaluate hard target penetrators pushing Mach 11.

So, ya know, an arrow is a bit slower.

Here’s the Rocketman “aiming’ what is known as a lab radar. NOTE: (If you have a bowhunting idea or concept, Darrel does testing and you can reach him at [email protected].)

Heretofore, Darrel is known as “the Rocketman.”

When the Rocketman starts talking, he gives me about 15-20 minutes (until steam starts to come out of my ears) and then he pulls back on the reigns.

Ballistic coefficient, Poncelet equation, yaw, lift, aerodynamic friction and drag, the Physics Hyper Textbook on and on and on.

Bro! He has me doing calculus!

Learn how you can make your own lighted nocks at home

The Rocketman brought some fancy gadgets to the Kinetic Energy show…

So on to Kinetic Energy (KE), which is super boring. But, we’ll play along, since it is the most common measurement of bow efficiency.

But is it the right one?

More to come, but for now,  I’ll stay on the rails with Kinetic Energy so the speed bow guys can relate with ‘hitting the target’.

The first time Rocketman said, “well, Troy, a bow is just a spring with fixed Kinetic Energy,” I thought… BLASPHEMY!

But, from what I understand, he is right.

BUT, you can change the arrow and gain some…..so hang on. Let me set the table here…

A bow is just a spring with a fixed Kinetic Energy. It can’t make more kinetic energy than what it already possesses.

On a basic level, radar measures a projectile’s speed over distance.

The testing unit that we used measures 5 total distances.  So, if you want to shoot 60 yards, the computer divides that distance into 5 increments.

[NOTE TO SELF – you need to put the target further than 60 yards to capture the flight speed. To address this, we placed the target at 70 yards. Because, if impact is at 60 yards, the data would be flawed for velocity testing because the target stops the arrow at a yardage that it should be being measured.]

Need help with target panic? Check this out…

Below is the spreadsheet, graphs, etc., shooting 3 different bows under the conditions described above.

Yeah, its super small. I don’t intend for you to read it and geek out (but that’s coming… keep reading!)

Just know that it’s a lot of information, and we ran the best test we know to do… today anyway.  (See my comments on being smart, today, included earlier in the article.  We will be smarter very soon!)

The Tools In Our Kinetic Energy Toolkit

The three bows we used in the Kinetic Energy testing were:

Our goal was to see the ‘launch’ velocity vs. 60 yard ‘impact’ velocity. (Remember the target was at 70 yards).

Rocketman has his gadgets, but what would Kinetic Energy testing be without some “adult” arrows?

Want to learn all about the history of archery? We got you.

So, the charts below tell us the story.

The top line is the launch velocity. The change in velocity is super boring… Until you look at the 60 yard impact KE.

The gap in the data sets shows the significant reduction in KE over distance. However, you see that gap narrow as arrow mass increases.

As you can see, in all the above graphs, the launch KE is relatively constant, but alas, further away, at 60 yards, with higher mass projectiles, we see something worth pondering. (Well, only if you think math is correct!)

Deer sounds… are you using the right one?

What are the results telling us? (Please pardon the steam coming out of my ears)

So, despite my heavy arrow bias, (I’m not much of a hair splitter), increasing launch KE 3-6 ft/pounds is really boring.

But the lower line, at 60 yards, is worth chewing on.

If you search around, many of the wide mechanical broadheads suggest KE’s of 45-60 ft-lb’s. Now, they don’t go out on a limb and say, “that will create a pass through, or break bones.” It’s just a recommended impact KE.

Formula for Kinetic Energy:
K.E. = 1/2mv2
(where m=mass of object and v=velocity)

And be clear, just like the firearms world, this is launch KE, maximum velocity. This is because a projectile can’t go faster once it leaves the muzzle or the string… It’s always slowing down.

Now in a vacuum… oh wow, throw in some zero gravity and guess what?

It still doesn’t go faster….. it would maintain launch velocity and you wouldn’t be able to breathe to test it.

Some adult field points and some, ahem, “super weenie points.”

There have been multiple companies and YouTube personalities showing fixed blade vs. mechanical pressure testing on deer thoraxes and other items simulating a critter. They use very complicated mechanical devices down to something as simple as a bathroom scale.

It’s not half a pound or 3, it’s exponential. The “precision” of the device doesn’t matter when the difference is 40 pounds.  Please search those tests up, because I know you’ll go do it anyway.

When it comes to arrow penetration, harder things push back harder… you can just blame Sir Isaac Newton for that and keep my hate mail down!

So, here’s the thing to ponder…

If X brand broadhead requires 50 ft-lbs to penetrate and another type takes, say, 10 ft-lbs., which one leaves you more energy to continue pushing?

Remember Newton’s 3rd law…“For every action there is an equal and opposite reaction.”

The arrow has to overcome the equal and opposite push back exerted by the tissues: hair, meat, bone, etc.

If you can shoot between the ribs every single time, none of this matters. I’m not that good, so give me the heavy stuff!

Learn how to determine your draw length

PLUS, here’s the kicker.  Harder things push back… harder.

You can just blame this on Newton’s 3rd law of physics. This will keep my hate mail down!

So, for the 50 ft-lb broadhead, if your bow produces 70 ft-lbs, you have 20 foot pounds of extra work potential.

Now, with that same bow generating 70 ft-lbs, shooting a beefier broadhead that only requires 10 ft-lbs to penetrate, has 60 ft-lbs of extra work potential.

If you could guarantee you’d never hit anything hard on a deer, elk or other critter, and always shoot between the ribs, none of this matters… you have a winner.

I’m not that good. So, give me all the extra I can get!

Make your own euro mount the easy way

What we haven’t studied, is actually shooting the different broadhead platforms to measure the exit velocities or impact velocity.  That one will take “some doing” to get it right.

Trust me, I want to know if I am right and “why.”  The math here says I am.  But Dr. Ed always says, “we won’t know until we actually test it under those conditions”.

This is why you donate to the Ashby Bowhunting Foundation, so we can go test these things and increase your effectiveness.

Troy Fowler’s life goal is to become a “professional small boy” just like Peter Capstick. Well, in reality, he’s a father to three great kids, miraculously remaining married for 30+ years while employed in a boring corporate fashion. He annoyingly asks “why does that do that” way too often. If you’re a bowhunter - he answers many topics on his YouTube channel - The Ranch Fairy.