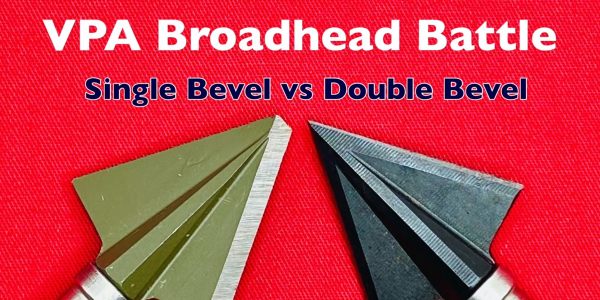 Let’s go through some of the design features and specifications and then test them head-to-head!

Here’s a look at the 150-grain, 2-Blade Double Bevel Penetrator as they call it, designed for maximum penetration. It’s machined out of a solid chunk of high-carbon steel one-piece design.

The blades of the VPA 2-Blade Double Bevel Penetrator are 0.065 inches thick and they are brought to a Rockwell hardness of 55.

The cutting diameter of the Double Bevel head is 1-1/8 inches.

You can see here the overall short profile of the VPA Double Bevel head, which aids in flight, and then the blades come back up. They are not back sharpened here but they flare up, again, just to lower the surface area and aid in flight.

Here you can also see the ferrule of the VPA Double Bevel extends all the way up to the tip, providing extra lateral support and rollover prevention.

The VPA Single Bevel is also 1-1/8 inches. It’s the same high-carbon steel, but this one is brought to a Rockwell hardness of 57. It’s also a bit thicker than the Double-Bevel, at 0.070 inches thick.

Now, here’s the 150-grain, 2-blade Single Bevel broadhead. It’s a very similar design to the Double-Bevel, although it’s single bevel. That’s a big difference I suppose. But, the cutting diameter is the same.

Again, the backs of the blades on the Single Bevel flare up just like they did with the Double Bevel Penetrator, to make it have an even shorter profile and aid in flight with less surface area. The bevel is 35 degrees.

I was really eager to compare these two heads, especially since they are the same weight, the same cutting diameter, and very similar thicknesses, and made by the same company.

In the flight test, I shot the Double Bevel and Single Bevel heads and then a field point for comparison from 40 yards.

40-yard flight test… (I was aiming at the lower dot)… A really good group and definitely within my margin of error.

I tested the out-of-the-box sharpness of both the VPA Double Bevel and the Single Bevel head.

Double Bevel out-of-the-box sharpness: 775. This head needs to be sharpened before hunting.

Looking for the best deer stands for your hunt?
Looking to determine Kinetic Energy & Momentum of your arrow?

I shot both heads into the ballistic gel that was fronted with 1/2-inch MDF and foam matting.

Having issues with target panic? Check THIS out!

After the MDF and ballistic gel penetration test, I tested both VPA heads again to see how sharp they were.

The deer is in your sight… Where do you shoot?

The Double Bevel penetrated through 55 layers of cardboard.

The Single Bevel penetrated through 62 layers of cardboard.

Learn how you can make your very own euro mount!

I shot each head into a steel plate five times. Check out the results…

Here’s a good look at the difference in the wound channels. The Double Bevel on the right has just a straight 2-blade hole, whereas the Single Bevel on the left has that classic “S-cut” hole. And that’s going to be a little bit more difficult to close up as a wound channel.

Here’s the Double Bevel after going through the steel five times. It spins very well. There’s really no signs of wear at all. I mean this thing is in pristine condition except for the tip, which had a slight rollover that would be very easily sharpened out. But overall, it did very well.

Ever wonder what is meant by “traditional archery?”

I shot the VPA Single Bevel broadheads into the ballistic gel to measure how much it rotatied.

The VPA Single Bevel rotated 45 degrees. If you look closely, you can see the wound channel and how it rotated in gel here.

I shot both of the VPA heads into a concrete block to see how they would hold up.

Here’s the Double Bevel, it also did fairly well. It got a little bit of tip curl. But, the edges held up well, but not quite as sharp as that Single Bevel for whatever reason. And that tip curl is very slight, easily re-sharpened, and reusable.

This is the Single Bevel after shootingit into the concrete block. It’s also the same Single Bevel head that went through the steel plate. It’s still in excellent condition. The edges are still sharp actually (that’s kind of weird). And the tip is just perfect as well. This could be easily re-sharpened and reused.

I have to say, both of them are really good.

But for me, there was no question, it’s Single Bevel.

This is a really good single bevel head with a super-simple design. But man, it’s got everything that I look for in a single bevel. And, I was really impressed how it compared to the Double Bevel in each of the different areas.

So, the winner of this broadhead battle is the VPA Single Bevel. Great job, VPA!