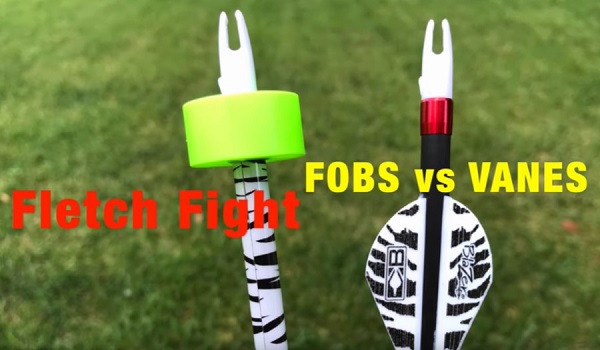 Over the years I had heard about the “FOBs” from FOB Archery on various archery forums. I learned that FOB stands for “Fletchings Only Better.”

But what was the story behind this new product, and would it really work better than fletchings or vanes?

The History of FOB Archery

The FOB is made of nylon and has “fletchings” that are at a 4-degree off-set.

The FOB was designed by an aerospace engineer named Paul Morris. He designed it based on the concept of aerodynamics.

He believed there was a away to improve upon the old fletching that Native Americans and people all over the world had been using for years and also in competitive archery. At the time, the FOBs were known as Starrflight FOB.

But then, in July of 2018, three business partners purchased the company from Morris and rebranded it to FOB Archery.

I finally got around to testing the FOBs. I have to be honest, when I first started reading about them and saw them, I was like, “Really?” My B.S. meter was going off a little bit.

But, I decided to give them a try.

The FOB is made of nylon. It looks simple, and in some ways, it’s exactly that. But in other ways, it’s very meticulously designed.

It simply slides onto the end of the nock. Then you insert your nock into the arrow shaft and you have essentially fletched your arrow. It’s that simple… and it’s fast.

>> View more N1 hunting shirts and the stories behind each design

The circular ring around the FOB is thicker in the front than it is in the back. It’s an air foil design that aides in the stabilization and flight of the arrow.

The FOB, although just a small piece of nylon, is precision crafted to give arrows proper in-flight stabilization.

The FOBs claim to be more accurate in a cross-wind than fletchings. The theory is that the cross-wind will blow a fletched arrow more off-course due to the larger surface area on the back of the arrow.

The combined with the air foil design, the offset vanes allow for greater spin. With the thicker front portion of the ring, and the thinner part in the back of the ring provides 360-degrees of stabilization.

Offset fletched vanes will rotate, but technically not the 360-degrees of stabilization that the ring of the FOB provides.

That gives you the fastest rotation that you can get with blazers.

Sometimes people use the blazer vanes with an offset at 3 or 3-1/2 degrees. Some will just buy them from the factory in a straight position. But, when you put them on with a helical, they spin a lot better and you get better groups.

I tested the FOBS compared to the 4-degree helical blazers to see how well the fly and group. I tested indoors and outdoors with field points and also outdoors at long range using broadheads.

When compared to arrow with Blazer vanes with a 4-degree helical twist, FOBs grouped extremely well indoors at 40 yards.

The FOBs vs Blazer vanes at 40 yards outdoors. They also performed very well in this test.

With Fixed Blade Broadheads at 80 Yards

I shot the FOBs vs Blazer vanes at 80 yards outdoors with fixed-blade broadheads.

This test consisted of ballistic gel with MDF board in the back of the setup.

Click to find the FOC of your hunting arrows!

Next, I did some testing into ballistic gel, shooting a regular vaned arrow with the Blazers and an arrow with a FOB on it.

I first shot the FOB and then the Blazers. On impact, the FOB bounced right back to my feet (about 4-5 yards).

The vaned arrow went through the ballistic gel and simply landed behind the gel block. It didn’t stick at all into the layer of MDF.

However, the bare shaft that had the FOB on it continued to fly through the gel and not only stuck into that layer of MDF, but actually penetrated all the way through it and popped out the other side and made a big dent in the next layer of MDF.

Notice that the arrow tip with the FOB on it penetrated better than the one with the Blazer vanes, because the vanes had to pull through the gel whereas the bare shaft just slipped right through.

After putting the FOBs through every test that I can think of, I was pleasantly surprised. Actually, I was borderline shocked by how well they performed. They passed every test I have.

The FOB popped off the arrow, as advertised, when passing through the ballistic gel. It also penetrated the MDF board in the back of the setup.

Pros and Cons of FOBs

Here is a summary of what I think are 7 pros and 7 cons to be aware of when considering using the “FOBs” from FOB Archery.

So, now that I’ve covered the 7 advantages of FOBs, I’ll cover what could be considered disadvantages:

If you do decide to purchase FOBs from FOBarchery.com, use code LUSK10 for 10% off!

In conclusion, I really like the FOBs. They passed every test I could think of. I’m ready to take them into the field!

For years, traditional archery has been married to the tried and true feathers and vanes. Let me know your thoughts or any questions you have on this alternative fletching in the comments below!