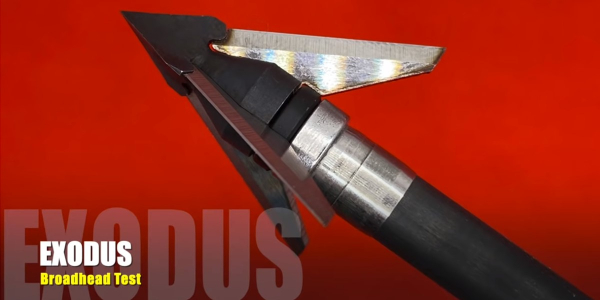 In this review, I tested the QAD Exodus broadheads, (the Swept Blade Model).

At the time of this review, I’ve taken more 60 animals in the U.S., Africa and Canada, all over the United States with this head. It has always been a great performer.

One day, Giles here at N1 Outdoors asked me if I’d ever done a standalone test on the Exodus. I thought about it and realized I never had!

So, since I updated my testing procedure, I thought it would be a great time to put the Exodus to the test.

Let’s see how it holds up in my testing.

Now first, we are going to zoom on in here, go through some of the design features and specifications and then put it to the test.

Here, you can see the Exodus head up close. Of course, it spins very well, with super tight tolerances.

There are some really unique features about this head…

>> Check out our other bowhunting shirts HERE!

First of all, notice the blade-over-shaft technology where the blades extend over the shaft. The reason for this is two-fold; First of all, it makes the ferrule super short.

The ferrule extends 13/16 of and inch beyond the end of the arrow, making it one of the shortest on the market. (It’s actually shorter than some field points!) And, the idea behind this feature is that it’s going to keep the overall length of your arrow about the same as when you shoot field points.

Having having such a short ferrule is that makes the ferrule itself extremely durable because it’s just so short. It’s going to be hard to bend or break that ferrule.

Should spike deer be your target? Check THIS out…

Additionally, the head is 100% stainless steel. The blades are 0.040 inches thick, with some of the thickest replaceable blades on the market, and these are stainless steel as well.

The truth about high FOC bowhunting

The Exodus has a hardened, chiseled tip that is cut-on-contact. The tip is actually very sharp and can be sharpened even more on the end.

Now, another thing that’s unique about the Exodus is the angle that the tip creates in the beginning continues the whole length of the broadhead. What that means is it’s going to protect the strength of the blade.

Here is the QAD Exodus compared to a Wasp broadhead. Notice how blades just suddenly jut out after the chisel tip. That’s not a flaw, as the Wasp is a great broadhead, but that’s going to put a lot of pressure on that initial flared angle of the blade. And indeed, when I’ve tested Wasp broadheads and others like it, that’s often the place that the blade breaks or gets really damaged.

With the Exodus, the tip and the angle of the blade continue the whole length of the broadhead, making it more durable. And, notice how the chisel tip is really wide. That is going to create a really big wound channel.

Let us do the math: Deer Gestation Calculator!

The cutting diameter of the Exodus is a full 1-1/4 inches. That’s pretty rare with a fixed, 3-blade broadhead. Usually, they are 1-1/8 inches. Sometimes they go 1-3/16, but there aren’t many that go a full 1-1/4. They can get away with that and still have good flight because of the overall short profile, due to the blade-over-shaft technology.

What shot are you going to take on that deer? Check this out…

So, you can see why I was eager to put this head to the test with all my new tests that I recently implemented. Let’s see how it performed!

Here’s the grouping. The field point was the first shot (in the middle), which hit a little bit low. (I dropped my arm on the shot.) The broadheads shot on either side of the bullseye there. They grouped together very well.

Out Of The Box Sharpness Test

Target panic got you down? Get the cure HERE!

I shot the QAD Exodus into ballistic gel that was fronted with 1/2-inch MDF board and foam matting.

Recurves and compound bows have their differences… Learn them!

After the ballistic gel penetration test, I again tested the sharpness of the Exodus to see how much it had dulled.

After the ballistic gel penetration test the sharpness test showed 250.

Deer hunting tips you MUST know!

The Exodus penetrated through 66 layers of cardboard. Wow!

Next I shot the Exodus broadhead through a .22 gauge steel plate 5 times. Check out the results…

Here’s the hole that the Exodus makes in the steel plate. You can see that it’s more than just a little circle with three slits coming off of it like some broadheads are. It opens up more of a triangle. Now, it’s not a pure triangle as like the Tooth of the Arrow, which makes a pure square. But, it’s one of the best triangular cuts that there is. Maybe the best of any 3-blade that I’ve tested.

Here’s the Exodus after going through the steel plate five times. It’s in pristine condition. The blades look pretty much brand new, with just a slight amount of cosmetic markup. The tip is in excellent condition, with a little bit of cosmetic discoloration and scrapes, but no damage to the edge itself.

Here, you can see what the Exodus did on an impala. This was really typical of my hunts with the Exodus. Not on every animal, but on a lot of them. It would make a really clean triangular hole just like this.

So, what’s “traditional” archery about anyway?

Finally, I shot the Exodus into a concrete block. Check this out!

The Exodus embedded really deeply into this concrete. It took me 15 minutes, with a hammer and a chisel, to get it out!

Here is the Exodus after sticking in the concrete. I mean it did embed in it. And if you look closely, you see that it’s in extremely good condition. Some of the blade portion that actually embedded in the concrete still kept its edge. You can’t even notice that it hit anything, let alone that it went through the steel plate five times and it then went into the concrete as well! The tip is also in excellent condition, except for a bunch of concrete that fused to it. But, even the very tip is still really pointy. That didn’t get bent or knocked off in any way. Excellent durability!

So what do you think of the Exodus? I’ve tested a ton of different broadheads and man, every time I test this head in any way, I’m blown away by how well it performs. It just doesn’t have many weaknesses.

I consider it probably the best all-around fixed blade head in its price category on the market today. And then you have the option of replaceable blades at that. Man, it really is a performer!

Arrow speed calculator just for you!

So, check out the scores and see how it did in the area that matters to you the most. I only tested the Swept Model, but the Full model does really well also. There are some states where you can’t shoot the Swept because it’s banned.

Find the Kinetic Energy and Momentum of YOUR specific arrows!

So, the Full model can use as an option in those states. But, I’ve found that the Swept Model is slightly more forgiving in flight and they’re equally strong as well.

Props to QAD, you guys are doing a fantastic job with the Exodus!

I hope you have tons of success with this head while bowhunting!