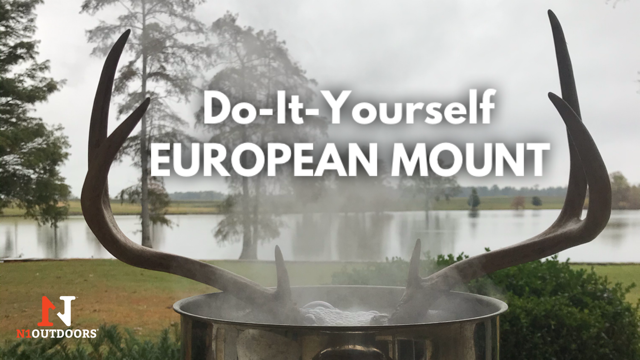 DIY Deer Skull | How To Make Your Own European Mount

Have you ever wanted to learn how to make your very own European mount of your recent big game harvest But weren’t sure where to start? We’ll show you how easy it is!

The European mount is a great option for a buck you won’t be taking to the taxidermist. And, it can be done very inexpensively.

On a recent bow hunt trip to South Georgia, my partners and I had identified a wide 6-point with spindly antlers and very small brow tines, as a buck that we felt like would be a good one to go ahead and harvest if given the opportunity.

Well, that opportunity presented itself the very next morning, as I was able to able to take this buck with my bow at about 12 yards, which is always fun and always a blessing.

However, this management buck was not one I was going to take to the the taxidermist.

So, we felt like this would be a great opportunity to show those of you at home how to do your very own European mount.

The “euro mount” process is not near as difficult as it might seem. You can do the entire process as home for as little as $10.

We’ve got a few essential materials that you will need to do European mount. I will go through those with you in just a second.

I want you to know that I’m not a taxidermist. I’m not a professional doing this. But, I have done it several times and over the years and through trial and error, have figured out some of the best practices in doing a Euro mount.

I’ve gotten the product where it has turned out almost as good as what you would get from a taxidermist. So, hopefully this video helps you out.

A few supplies that you are going to need to the European mount are obviously, a knife to skin the head from the skull, a good set of forceps, a screw driver.

It doesn’t have to be expensive! You can make your own Euro mount for around $10!

You will also need two quarts of hydrogen peroxide and some liquid dish soap. You’ll also need some dark wood stain, masking tape, clear shrink wrap, and a pitcher or a big cup to add water to the pot as it’s boiling.

How To Make A Euro Mount Step-By-Step

In just 5 hours, you can have a European mount for your deer skull that you can be proud of.

How to do your own European mount…

Read a more detailed set of instructions on making the Euro mount in the sections below:

>> Get the Nside scoop on all the N1 Outdoors apparel!

The key to the process is the 4 hour boiling time. If you do it for 3 hours, it’s not going to come off as good. Slow simmer for 4 hours works best. If you boil it too hard, it’s going to weaken the bone and you’re going to break some bones. So, be sure it’s a slow simmer. Don’ try to do it too fast.

Learn how to identify other animal skulls HERE!

After boiling, remove the eyes and the tissue from the skull.

After 4 hours of boiling the skull in the liquid dish soap, the meat around the skull will be very tender. You just work your knife in and remove the meat and the tendons as best as you can. Much of the meat will just fall away during this process.

You don’t want to get too aggressive with it because you can pop a bone loose.

The most aggravating part is around the eye sockets because all the eye sockets connect to the inside of the skull in the brain (we’ll cover how we are going to get the brains out shortly) and it makes them a little bit harder to get to.

All After you’ve gotten all the meat scraped off, it’s now time to pop the ear buds out. This is how we get the brains out.

Take your screwdriver and work it around in the ear buds and pop them out.

Remove the sinus tissue from the from the skull with forceps.

Now use the forceps to remove all the sinus tissue.

You need to get everything out of the sinus cavity because anything that you leave, will cause the bone to turn yellow. It may take two or three years for it to happen, but I’ve had it happen.

Be gentle while the skull is hot, because if you are too rough while removing the tissue, you could break the bone.

And, if you do break the bone, don’t worry. Sometimes the bones at the bottom of the nose will come loose if these tendons get cooked too long. If they do, you can put them back with super glue. So, don’t worry if they come off. You can super glue them back.

Get as much of the sinus tissue as you can from the front side and then you can get the rest under the brain cavity.

Use a water hose to rinse out the brain cavity.

Once you get the ear buds popped out and you get the sinus cleaned out, you’re going to need a water hose to rinse out the brain tissue.

Put the water hose into the hole where the brain is located and flush out the brain matter. Anything left over will break loose once we boil the skull for the second time in the peroxide.

Wrap antlers in shrink wrap and masking tape and boil a second time for 30 minutes.

Once you are finished rinsing the brain matter out of the brain cavity, it’s time to boil the skull for a second time in order to bleach the bone white.

Add two quarts of hydrogen peroxide to the existing pot of water.

Wrap the base of each antler tightly with shrink wrap and secure it with masking tape. There’s not really any particular way that you need to do this other than to just get them wrapped from the base up to the bottom of the brow tine.

Once the skull is placed into the boiling water, the plastic wrap will shrink tightly to the antlers and keep out the majority of the water. Some water may find its way through and that’s why we have the dark stain.

We can come back and if some of these darker parts around the base get bleached a little bit, we just use a q-tip to re-color it and you’ll never know the difference.

Once the antlers have been adequately wrapped, place the skull back into the boiling water and peroxide for 30 minutes.

After the 30-minute boil in the peroxide and water, remove the skull and take the plastic wrap off.

Touch up any bleached areas of the antler base with wood stain and Q-Tip.

The plastic wrap will seem sticky and gummy, sticking tightly to the antlers. And, that’s what you wanted to do because that keeps the peroxide off of the antlers and prevents it from bleaching.

If there has been any unwanted bleaching on the base of the antlers, use a very small amount of the dark wood stain and apply to those areas with a q-tip. You can repeat as many times as you like to get the desired darkness.

But, how do you get the skin off the skull initially?

I wanted to go back and cover the preparation process of the skull before you even start to boil it.

Obviously, you have to cut the deer’s head off. And preferably, you would want to cut it at the last vertebra that connects to the back of the skull. (Normally what happens because the deer’s neck and ears compressed on the spine, is that most people naturally cut about one vertebra back, so you have to two things to cut off before you can start boiling the skull.)

To remove the last vertebra, cut just behind the brain lobe as pictured here.

The place you want to be careful about is this lobe on the back of the skull where the brains are. Be careful not to cut into that lobe. Just use it as a guiding point as you cut. Once you cut around it, you will be able to remove the last vertebra.

But while the deer head is lying on the ground, get your knife between the teeth and just cut back toward the back of the head. There’s going to be meat back there, so you want to cut that on both sides, so that you can open the deer’s mouth.

Once you’ve cut, pull the jaw all the way back until the bones that joined up under the brain cavity are loosened. Then then you can remove the meat from around those bones and pop that bottom jaw off.

Now, you are ready to start boiling!

We hope you’ve enjoyed this instructional article and video on how to do your very own European mount. We hope you have a great deer hunting season, and remember… where moments happen, we’ll meet you there!

BONUS: Watch N1 Outdoors® co-founder, Josh Wells, teach you the Euro mount process, step-by-step! Be sure you watch to the end of the video where Josh teaches you how to prep the head and the skull for this process that he shows you. We hope you learn something. Link below… enjoy!

Trout fishing tip | How to catch trout with the Gulp Minnow

In this N1 Minute, learn a trout fishing tip to help you catch more trout. We’ll show you how to catch trout using a Gulp Minnow rig.

Get The Put A Hook N1 Trout Tee

When it comes to fishing, you don’t want to just fish… you want to Put A Hook N1. We’ve got a tip to help you do just that. Stick with us for the N1 Outdoors N1 Minute.

Today we go to Fries, Virginia, to hear from Jessup Lambert, who’s got a tip to help you catch more trout.

Hey guys, on this week’s N1 Minute, we’ve got a few tips for you when it comes to trout fishing.

I’m going to focus on using the two-and-a-half inch Gulp Minnow… the Watermelon Pearl. Any kind works, but I prefer this one. My advice would be to hook it up with a drop shot, probably 8-10 inches.

Use a size 6 hook, bait hook, it doesn’t matter which way.

How to fish it

Your best success can come from either throwing the Gulp Minnow upstream and retrieving it back toward you and letting it swim in the current.

Usually, the drop shot will hold the minnow in place. It will almost turn around and look upstream, giving it a life-like feature.

If you cast downstream, I’d suggest a slow retrieval, that way it can do the same thing, and flutter in the current, giving it a life-like feature. And the trout tend to strike it when it stops moving.

Find out how to cast light lures with a baitcaster here

Generally, in 2-3 feet of water you’ll have your best success. I have fished it in lakes, bringing it across the bottom. You’ll have the same results. It doesn’t matter if it’s dingy or clear. I’ve had the same success with the Gulp Minnow.

Thanks for tuning in to this weeks N1 Minute. I hope you get to Put A Hook N1.

Thanks for joining us for this edition of the N1 Outdoors N1 Minute. If you’d like to see other episodes of the N1 Minute, you can visit our website at N1outdoors.com. While you’re there you can also check out our N1 Moments blog and also pick up some great N1 Outdoors apparel as well.

We hope you have a great week, and remember… “where the moments happen… we’ll meet you there.” We’ll see you next time.