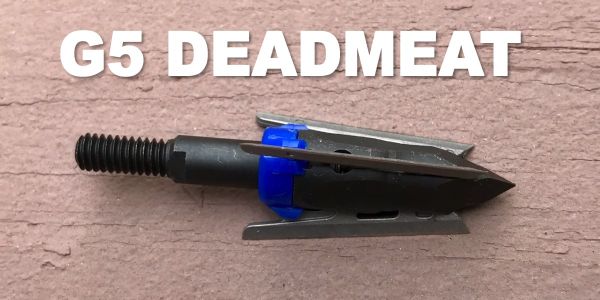 In this review, I tested a mechanical called the G5 DeadMeat broadheads.

Right off the bat, I was very impressed by the design. First of all, it’s a 3-blade head and it has a cutting diameter (when blades are fully depoloyed) of 1 and 1/2 inches, which is nice.

That cutting diameter is perfect for whitetail deer, turkey, smaller hogs, and so forth.

I’m typically a fixed blade guy, but I’m constantly looking at the latest and greatest broadheads, and always willing to try some new mechanicals.

They are also  extremely forgiving. Now, I realize that a lot of heads fly very well. My bow is really well-tuned. I can pop balloons with fixed blades out to a 100 yards, but this is on the extra forgiving side for sure. So, I love that.

Does your arrow have a high FOC?

On the downside, I don’t like that it’s just a metal injection molding. I’m not a huge fan of that. It’s still good, and it’s better than a lot of aluminum heads, but it’s not as good as machined heads (of course, it would cost a lot more if it were a machined).

However, it is still a solid steel and it has a two-piece ferrule. It is a few different composite pieces of steel, but it is, in essence, 100% steel.

Looking for a fixed 3-blade that’s “Tuff?” Check this out…

In the first test, I shot the DeadMeat through a 3/8” piece of plywood. This is my favorite thing to do with mechanical broadheads, so that I can see how well they deploy upon entrance. It also helps me see how well they penetrate and hold up to the plywood. In many ways, it’s similar in consistency to bone.

If they don’t hold up to plywood then I’m not going to be hunting with them for sure.

So let’s see what happened with the DeadMeat in the 3/8-inch plywood.

After shooting into the plywood, the blades were not near as sharp. So, they dulled significantly such as metal injection molded blades will often do.

Use this arrow speed calculator to find the speed of your arrow!

Something to watch for

I have known someone who had one of the three heads in his pack that had blades that would not deploy at all. Upon further inspection, he found that there is a groove that the blades slide up and down in.

This groove can contain small burrs, which is what was preventing his blades from opening. He talked to G5 about it, and of course, they replaced them. But, that would be something to test before you shoot them to be sure the blades are sliding and opening effectively.

These heads have good durability. I’m impressed with that. They have a really good cutting diameter size for a 3-blade and it will really make a nice hole.

In addition, flight is extremely good. You should always have a well-tuned bow. But, this head would be extremely forgiving, even with a bow that is not optimally tuned.

While this head would not be my first choice on an elk (those bones can be really tough, and I would want to be sure to use a fixed blade head on an animal like that), I’m sure it would take an elk if you hit it in the right place.

But, it would be great for hunting whitetail deer, turkey and small hogs.

Overall, I give this head a thumbs-up. 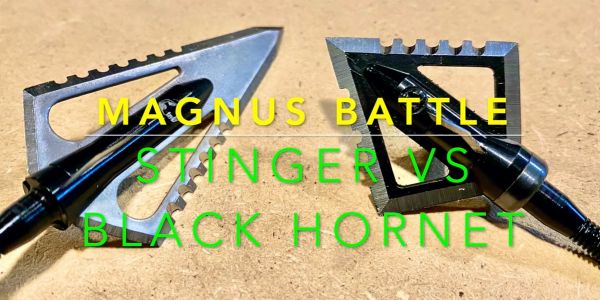 Needless to say, I was really excited about this broadheads battle.

I tested both the Magnus Stinger Buzzcut and the Magnus Black Hornet Ser Razor in 125 grains.

Why the (Re)-test of the Magnus Broadheads?

Before we get to the results, let me explain why I did this test.

The fact is, these broadheads have taken a ton of animals all over the world. They also come in at a really good price point. They have a lifetime warranty and they have a very loyal following.

And so, in recent times, I thought, “You know what? Let me rethink the way I critiqued them in the past and put them through some more testing.”

So, I purchased two packs of these and put them through the test. Let’s see how they did…

Simple, easy to use FOC Calculator

I retested the Magnus heads with the same format that I have recently been testing with, so that all my tests have a consistent format. This way, you can look at all the different broadhead reviews and see how they measure up to one another.

In this review, I’m using my Bowtech SR6 with a 27-inch draw at 72 pounds. I’m shooting a 460-grain Bishop FOC King Arrow. I’m using FOBs and I’ve got a Nockturnal lighted nock on the end of the arrow shaft.

So let’s learn a little bit more about these heads and then see how they performed!

I shot bot the Buzzcut and the Black Hornet from 70 yards and was able to pop a balloon. The black hornet flew very closely to a field point at this distance as well.

First, I shot the Stinger Buzzcut and then the Black Hornet. Below you can see the penetration results.

I shot both of the Magnus Stinger and then the Black Hornet into a 22-gauge steel plate.

So, what do you think of the Magnus broadhead battle? I guess it’s not really a battle, because they are both Magnus heads and they are both great. Each head performed very well. Honestly, they both did better than I expected.

The flight was very good, out to long range.

The penetration was very impressive; 9 inches and 9-1/4 inches. The Stinger penetrated just slightly better than did the Black Hornet.

And then through steel, both of them held up extremely well through the steel plate and kept their edge through five shots.

Quickly calculate your arrow speed with THIS!

So, I would just say that overall, both of these broadheads are winners. If you’re going to choose one or the other, I would say if you have a lighter setup, where you’re shooting less kinetic energy and less momentum, then maybe you want to go with the Stinger. It has a smaller cut. It’s going to be prone to penetrate a little bit more deeply.

If you have a heavier setup that produces more KE, and you’re looking for that extra cut, you’re getting an extra 1/8-inch cut in both directions with the bleeders and the main blades in the Black Hornet. They are also much thicker blades. So, they should be less prone to bend if they hit a heavy bone.

These are both great heads for my purposes. But, if I’m taking one out in the deer woods, it’s going to be the Black Hornet. In this review, I tested the Ozcut Hurricane broadheads.

Ozcut is a company outside of Australia and the time of this review, they are a relatively new company. I’ve been intrigued by these broadheads and was excited to test them out.

I have a passion for single bevel heads. So, I love it when someone comes out with a single bevel, 3-blade head.

Now, I’ve seen some other single bevel multi-blade heads that had some design flaws that prevented them from getting the full benefit of the single bevel.

However, I was intrigued by this one for a few reasons that we’ll get into right now.

My Initial Impression of the Ozcut Hurricane

First of all, the Hurricane is one piece, solid construction, and made out high-carbon steel.

The blades are really thick. And, for a single bevel to be of a benefit, they need to be thick like that.

There’s a nice tanto tip, so it’s a really durable tip and the back of the blades are sharpened. So, if it doesn’t go all the way through the animal, that head is going to stay in there doing some cutting. It also makes it easier to pull them out of your target.

So, let’s see how the head holds up, how it penetrates, and how it does in this testing.

The cutting diameter on the Ozcut Hurricane broadhead is 1-1/16 inches.

The Ozcut Hurricane flew exceptionally well in the long-range shot testing. I was able to pop a balloon at 80 yards with ease.

FOC Calculator for your hunting arrows

In the next penetration test, I shot the Ozcut Hurricane into a steel plate, followed by a layer of MDF behind it.

Because it’s a solid machine broadhead, I shot the Hurricane into a concrete block. Not many heads have held up really well through this. the Bishop held up well, and also the Iron Will. The Tooth of the Arrow broadheads, Exodus, and A-TAC broadheads also held up quite well.

Let’s see how the Ozcut does.

I was curious to see how the rotation of the Hurricane would do in a ballistic gel. So, I shot it into the ballistic gel (below). I also had some MDF behind it.

In this test, I compared it to a single bevel, 2-blade head, the Bishop Scientific Method to see how it rotates in the same medium. I also compared it to the Exodus broadheads.

A 300 grain fixed blade broadhead? YES!
Click to learn about the most devastating bowhunting shot

Final thoughts on the Ozcut Hurricane

So there you have it, the Ozcut Hurricane. This broadhead is a winner. There’s a lot I really like about it. It flies really well.

They say the single bevel design helps to speed up the rotation. I can’t verify that because I can’t quantify the rotation. But, I can tell you, I shoot a lot of single-bevel heads at long range and man, this one was really easy to pop balloons with. It was automatic.

I would say this is amongst the very best shooting long-range, solid fixed-blade broadheads that I’ve ever shot. I can’t think of any that fly better than this.

This head is right up there with the A-TAC. It just flies really well.

This head also penetrates really well. You can see through all those mediums and where it rotated really well through the gel. You could see that S-cut in the steel and see it starting into the wood as well.

Check out the review of the Ozcut Elite Series 3-blade!

There are two things about this head that I think they could have done differently.

What could have made it like even better is using a higher quality steel. Not that this is bad – it’s a good machined head, out of a solid chunk of carbon steel. But, when you’re using a single bevel broadhead, the rotational force and the pressure that is put on that one blade angle is intense. This calls for premium steel.

After shooting it a few times, you can see where it gets dinged up.

In addition, it’s not super easy to find that bevel to sharpen it just right.

I also wish there was a larger cutting diameter. And, although it penetrates really well, the 1-1/16 inch cutting diameter is not the best for opening up a very big hole. I just wish it was bigger.

If it was like 1-1/8 inch, even or 1-1/4 inch, that would be awesome. If it was just a little bit bigger entrance and exit hole, I would like it even more.

So, what is this type of head great for? As it is, this would be a great elk or moose head for lower kinetic energy setups. I think it could also be great for deer hunting, for big hogs, bears or African plains game.